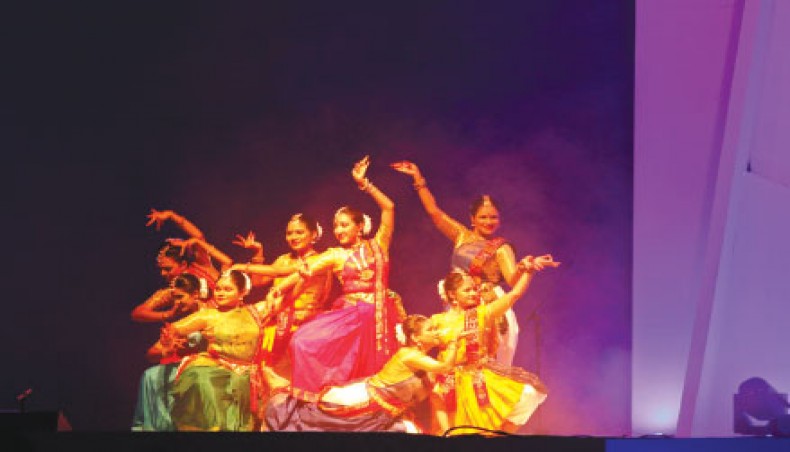 Winter has just started to set in, with the nights getting longer and colder and patches of fog descending upon the neighbourhoods across the city as elsewhere in the country.
The chilly weather, however, couldn’t deter the music lovers from attending the Bengal Classical Music Festival 2016 that began on Thursday at the capital’s Army Stadium.
The fifth edition of the festival, one of the biggest classical music events in South Asia, was inaugurated by finance minister Abul Maal Abdul Muhith.
Among others, cultural affairs minister Asaduzzaman Noor, Indian high commissioner to Bangladesh Harsh Vardhan Shringla, Square Pharmaceuticals Ltd. managing director Tapan Chowdhury, and BRAC Bank Limited CEO Selim RF Hussain were also present on the occasion.
The evening began with an eye-catching performance of different genres of classical dance by the iconic Bangladeshi dancer Sharmila Banerjee and her troupe.
There was also a performance by Rabi Karojwal Nrityamalika featuring dance forms used typically in the dance dramas of Rabindranath Tagore.
Afterwards, the stage was set for Pravin Godkhindi and Ratish Tagde. The duo presented an instrumental piece combining flute and violin, holding the audience spellbound.
Indian Hindustani classical music vocalists Ashwini Bhide Deshpande and Sanjeev Abhyankar were the first vocalists to perform on the evening, presenting several recitals.
Subsequently, vidushi Girija Devi, ustad Aashish Khan, vidushi Ashwini Bhide Deshpande, pandit Sanjeev Abhyankar and Dr L Subramaniam took the stage and mesmerised the audience with a medley of songs and tunes.
The main attractions of the opening day were the performances by Girija Devi, Aashish Khan and L Subramaniam.
Khyal presented by Girija Devi, an eminent Indian classical vocalist of the seniya and banaras gharana, made the night special for the music lovers.
The Army Stadium – venue for the five-day festival – turned into a gathering place for the music lovers a majority of whom were relatively young. New Age talked to several attendees who said they were eagerly waiting for the concert to come.
‘For me, the Bengal Classical Music Festival is the most anticipated event of the year. I am sure many others like me share my enthusiasm and admiration,’ said Mou Zahan, who came to the programme with several of her colleagues.
The fifth edition of the festival, organised by Bengal Foundation, has been dedicated to eminent poet-playwright Syed Shamsul Haq who died in September.