Fahmim Ferdous
Pandit Anindo Chatterjee, considered one of the greatest tabla maestros of the 20th century, made a memorable debut at the Bengal Classical Music Festival yesterday, filling the air with incredible rhythms.

Along with Anubrata Chatterjee, his son and acclaimed tabla artiste himself, Pandit Chatterjee’s performance will remain one of the highlights of the year. The duo presented various forms of a tabla recital — various peshkar, kayda, tukda and rela.

The third night of the festival in the capital’s Army Stadium began fittingly with a seven-year old girl taking the stage in a chorus performance, as audience continued to throng the classical music bonanza. 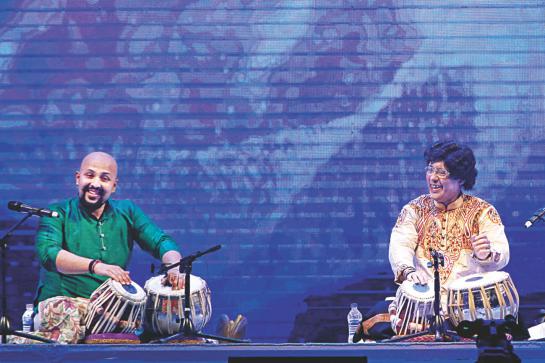 Ishrat Fuljhuri Khan, the youngest performer in the festival’s history, performed a group sarod recital by the students of Bengal Parampara Sangeetalay, presenting a composition in Raga Kafi. Their teacher, noted sarodia Pandit Tejendra Narayan Majumdar, confidently promised at the end of the performance to produce at least one or two national-level sarod artistes from this crop of students in the next five years.

Dr Prabha Atre, another shining star in the world of classical music, then made her debut on the stage of the world’s biggest festival of classical music. The 84-year-old artiste performed an evocative khayal in Raga Shyam Kalyan, and then performed a dadra “Basanti Chunariya” and a Raga Bhairavi before Anindo Chatterjee’s performance.