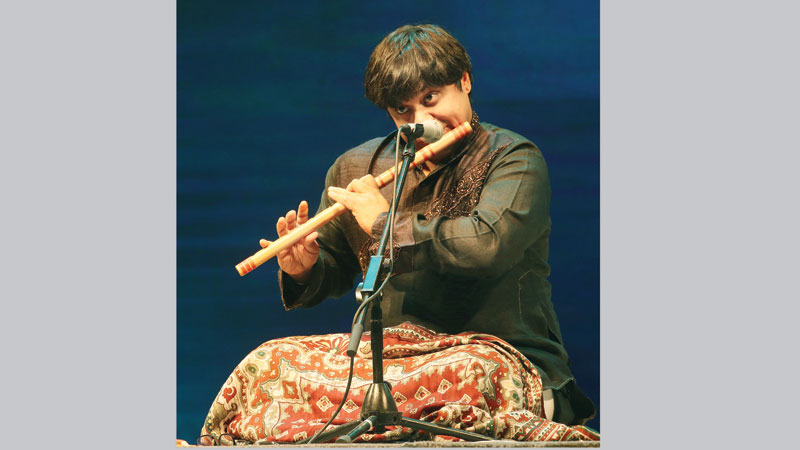 Shashank Subramanyam, a noted flautist from India, fascinated the audience with his blissful performance on the third day of the fifth edition of the Bengal Classical Music Festival (BCMF 2016) at the Bangladesh Army Stadium in the capital last night. The Grammy-nominated young Carnatic flute virtuoso, who was the second performer of the night, enthralled not only the classical music aficionados who understand this genre of music, but also all who gathered on the venue with little interest of connecting themselves with the classical music world.
The first performance was sarod by students of Bengal Parampara Sangeetalay. The students were Kamal Jahir Shamim, Khandakar
Shamsuzzaman, Md Ilias Khan, Illham Fuljhuri Khan, Ishra Fuljhuri Khan, Sharif Mohammad Khan and Al Junayed Didar. They played a composition on Raga Kafi. Pinu Das Sen and Ratan Kumar Das accompanied them on table during the performance. Pundit Tejendra Narayan Majumdar, the guru of these students expressed his optimism about the bright future of his students and felicitated them after the performance. Artist Hashem Khan handed over the crest to the 7-year old Ishra Fuljhuri Khan, the youngest artiste of this year’s festival.
The third performance of the night was Khayal by Dr Prabha Atre, a distinguished classical vocalist and one of the senior musicians of the Kirana Gharana in India.
Other performances of the third day were—Tabla by Pt Anindo Chatterjee, Dhrupad by Pt Uday Bhawalka, Sitar by Pt Sanjoy Bandopadhyay and Khayal by Ust Rashid Khan. This year, a total of 165 Bangladeshi artistes and 82 Indian artistes will perform on one stage during the five-day extravaganza. Besides, 17 foreign artistes will perform for the first time at the festival. The festival, opening at 7pm and closing at 5am, will continue till tomorrow.