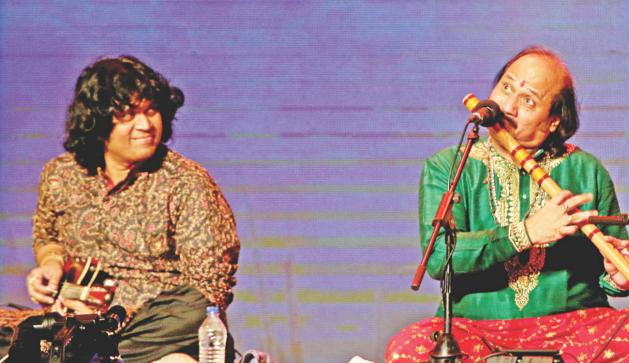 Through presenting a immaculate dance recital eulogising Nataraj,Vidushi Madhavi Mudgal set off the event. A performance of tabla lahora by the young artistes of Bengal Parampara Sangeetalay kept the audience intact in the realm of rhythms.

Prominent Bangladeshi vocalist Priyanka Gope was euphoric in her rendition of Raga Bageshree. Gripping the precise ragdari, the artiste expressed the emotional contents in the alap and vilambit bandish “Kaun Gata Bhaili”, and exerted the lyrical expression of the bandish. Her sargam combination, lovely taan performance, meend, murki and a fondness of bolbistar were praiseworthy.

Rahul Sharma healed the audience in a regal performance of Raga Gauti on santoor. He delved into the alap, jod, jod alap, gaut, jhala and tehai parts of the recital as Satyajit Talwalkar, a disciple of Ustad Zakir Hussain, fantastically produced torrents of beats based on rupak taal (seven beats). He showcased the symphony with several variations of gaut performance with different technicalities, reminiscent of his father and guru, Pt. Shiv Kumar Sharma.

Vocal music presentation by Mohammad Shoeb and others came next. The singer rendered Raga Darbari Kanada with a fusion of beats of Pakhawaj and tabla. 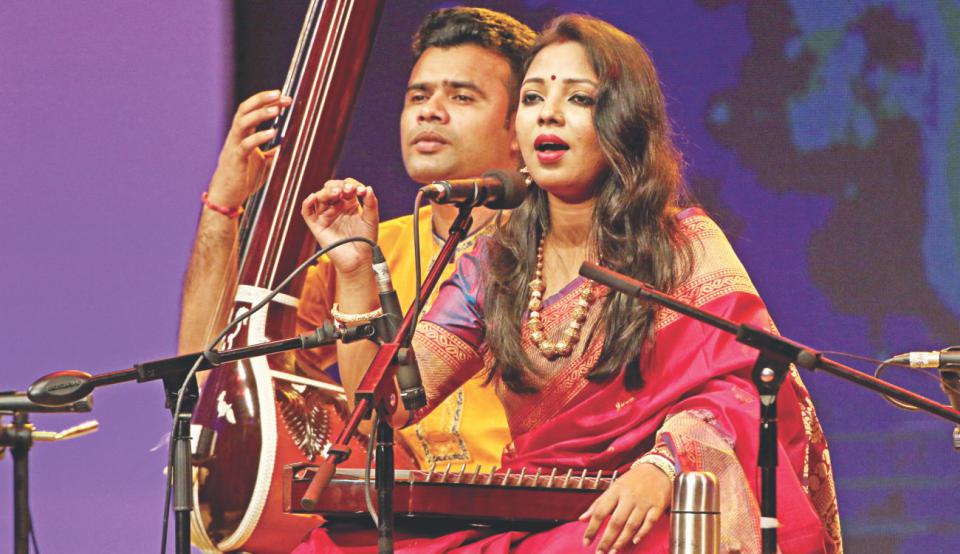 Priyanka Gope sings her heart out at the festival. Photo: SHEIKH MEHEDI MORSHED

Purbayan Chatterjee dramatised his sitar recital incorporating the magic of mute (atit) tehai that criss-crossed the entire recital. The artiste started off his recital with playing Raga “Hemlalit” (intermingling of Raga Hemant — created by Baba Ustad Allauddin Khan, and Raga Lalit) depicting an aura of dewy night together with a wait for dawn. Hemanta is also the Bengali season of golden harvest while Lalit means art. Purbayan, a sitar prodigy of Senia Maihar Gharana, portrayed the art of gold in his recital fabulously accompanied by tabla artiste Anubrata Chatterjee. With a great command over all the three octaves of sitar coupled with an outstanding ragdari and speedy recital, Purbayan showcased the gravity of the raga while a smiling Anubrata displayed the fineness of layakari on matta-taal in vilambit composition and on teentaal in drut composition. The sitarist later played a folk dhun with an elaboration of raagmala.

Flute maestro Pt. Ronu Majumdar paired with mandolin artiste U Rajesh was the final performance of the night. The maestro duo styled a transcendental melody of Raga Natbhairav (Sarasangi in Carnatic Classical Music) with powerful rhythms of pakhawaj by SV Ramani and tabla by Pt. Abhijit Banerjee. Music lovers thoroughly enjoyed the recital where Ronu Majumdar played mesmerising flutes of varied shapes and U Rajesh played heart-rending melodies on mandolin. Prior to that, Pt. Ronu Majumdar offered his musical prayer through reciting Raga Mangal Bhairav and U Rajesh mesmerised all with the presentation of a sweet Raga Amrit Varshini. A blitzkrieg between pakhawaj artsite and tabla artiste followed, where the duo encountered artistically. It was Pt. Ronu Majumdar who wrapped the nightlong soiree with performing a Bhatiali dhun that received the audience so fondly thanks to the consent of Abul Khair, Chairman of Bengal Foundation.