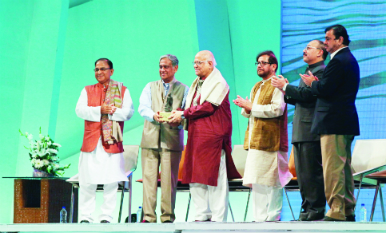 Day one of the Bengal Classical Music Festival

It’s that time of the year again, when Dhaka is lit up with festivals galore, and Thursday marked the beginning of the music festival that started it all and turned November into the most happening month in town – the Bengal Classical Music Festival 2016. The first day of the much-anticipated event began to draw in crowds at the Bangladesh Army Stadium even before the 7pm start, especially those keen on scoping out the best spots and avoiding the queuing that would inevitably follow.
The program took off like clockwork and 7pm, and the audiences were greeted with a short film presentation about the festival. The opening performance at the Bengal Classical Fest was a dance presentation called ‘Robi Karojjal’ by the group Nrityanandan, and was choreographed by Sharmila Banerjee. The second part of the performance consisted of a Manipuri dance.
When the dance numbers concluded, Pravin Godkhindi on the flute, Ratish Tagde on the violin and Ramdas Palsule on the tabla performed an electric duet, completing a Raga Maru Behag and Raga Hansadhawani in style. At this point, the music stopped to pay tribute to two recently deceased legends in their fields – Dr Balmurali Krishna and Ustad Ali Ahmed Hussain.

The inauguration ceremony of the Bengal Classical Music Festival 2016 commenced at around 9:30pm. Finance minister Abul Maal Abdul Muhith, the chief guest who announced the official opening of the festival, said, “It is a monumental achievement for us that this festival is now the largest classical music event in the world. 87-year-old Girija Devi’s performance will be the pinnacle of this year’s event. This evolution in our people’s ethos started with a protest when there was an attack on our cultural integrity. To understand classical music, one has to acquire the taste to understand the intricacies of this beautiful form of music. Whoever has acquired this taste will never succumb to any sort of violence.”

Special guest, Minister of Cultural Affairs Asaduzzaman Noor, MP said, “This is a matter of great joy that the festival is taking place despite all the uncertainties.” He remembered those who had given their lives during the Holey Artisan and various other militant attacks. “The torchbearers in our cultural ecosystem must protest against these incidents. Our children must become culturally aware and sensible to these issues.” Finally, he recited a poem by Tariq Sujat in remembrance of those who gave their lives during the Holey Artisan attack.
Indian High Commissioner, H E Harsh Vardhan Shringla, also a special guest at the event, said, “One of the key features of this event is that it brings emerging and established artists to the same platform and opens doors to a new world for the listeners of classical music. This festival will help strengthen the ties between our two great nations.”

The opening also announced the biggest performance of the night amidst tumultuous applause – Kheyal by the iconic Vidushi Girija Devi, who first made her public debut in 1949, broke all barriers of the times and devoted a lifetime to her art. The maestro began with a Kheyal in Raga Jogkauns, followed by a rousing Thumri in Raga Mishra Khamaj, Tappa in Raga Kafi and Dadra in Raga Mishra Gauri. The audience listened in complete silence, awed by Vidushi Devi’s fiery tones and masterful control, as well as the vocal support provided by the immensely talented Sunanda Sharma. With her, on the tabla was Gopal Mishra; on sarangi Murad Ali Khan and on harmonium Sumit Mishra.

Vidushi Girija Devi was followed by Ustad Aashish Khan on sarod, who performed Raga Darbari Kanada, Alap-Jor-alap-Jhala, as well as Rafa Chandranandan and Mishra Bhairavi. Although Ustad Khan started off slowly, easing into the flow with some soothing tunes, the music wove in an out of some epic crescendos and, accompanied by Pundit Bickram Ghosh on the tabla and Siraj Ali Khan on sarod, the Ustad finished on an incredibly high note that left the crowd cheering for more.
The other performances of the night included Jasrangi Vocal Duet featuring Vidushi Ashwini Bhide Deshpande and Pundit Sanjeev Abhyankar. The former performed Raga Lalit (shuddhya dha), while the latter rendered Raga Puriya Dhaneshree. Ashwini performed Raga Durga, while Sanjeev performed Raga Bhupali. During their performances, Ajinkya Joshi and Rohit Majumdar were on the tabla and Milind Kulkarni and Tanmay Deochake were on the harmonium. 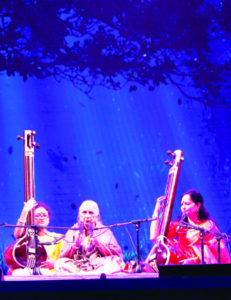 The finale of the first day of the Classical Music fest involved none other than the internationally acclaimed violinist Dr L Subramanium, accompanied by Tanmoy Bose on tabla. Dr Subramanium held the crowd enthralled with his incredible performance, and the music lovers who stayed behind will tell you that the plaintive notes of the Carnatic violin vanishing into the misty haze of dawn was the most magical moment of the night.