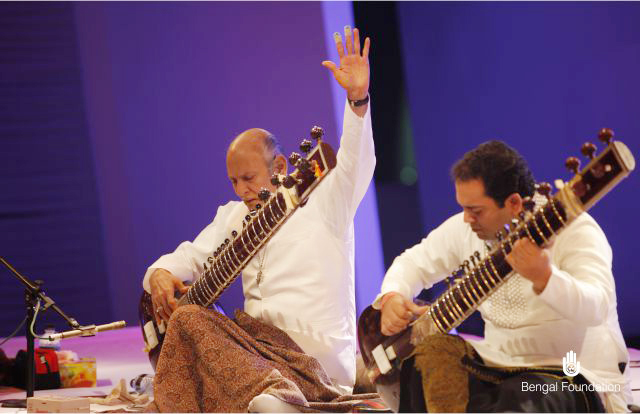 From his maternal side, Rais Khan is a descendant of great sitarists of Etawah Gharana. His mother was the elder sister of Vilayat Khan. Rais Khan has been influenced by his maternal uncle’s style. The sitar he plays is ‘Gandhar-Pancham’ Sitar – which was standardized and designed by Vilayat Khan himself. Rais Khan is the torchbearer of the Mewat or Mewati Gharana (lineage), which is connected to Indore and the “beenkar baj gayaki ang” (singing style combined with rudra vina approaches) carried out by Rais Khan’s father Mohammed Khan, a rudra vina (been) player and a sitarist. Despite his extensive meend work and the gandhar pancham sitar style he uses, Rais Khan’s alapi, gatkari and gamaki work is different in approach, pacing, and even technique, from the Etawah style. Amongst the Khayal and dhrupad doyens, Rais Khan’s gharana is a lineage containing the masters Haddu Khan, Hassu Khan, Bande Ali Khan, Nathan Khan, Babu Khan, Wazir Khan, Waheed Khan, Murad Khan, Latif Khan, Majid Khan, Nazeer Khan, Amanat Khan and Rajab Ali Khan of Dewas, Madhya Pradesh. As Rais Khan’s mother was a singer and his father was a beenkar, a unique combination of Khayal (the most popular classical vocal style), Dhrupad (the older and most orthodox classical form) and thumri (lyrical semi-classical form) – angs (approaches) developed in his playing.[6] He gave his first public concert at Sunderbai Hall in the presence of the then Governor of Bombay Sir Maharaja Singh. He is also a vocalist and is the first one to record the geet Ghungroo toot gaye for BBC London in 1978. Like Vilayat Khan, he often sings and demonstrates compositions. He has been touring extensively throughout the world. For some time, Khansaheb had stopped playing concerts of classical music. He returned in the 1980s and was invited by Ali Akbar Khan to perform in California. Rais Khan moved to Pakistan after marrying a Pakistani lady. He has four sons: Suhael Khan, Cezanne Khan, Farhan Khan and Huzoor Hasnain Khan. Farhan sometimes performs with him.