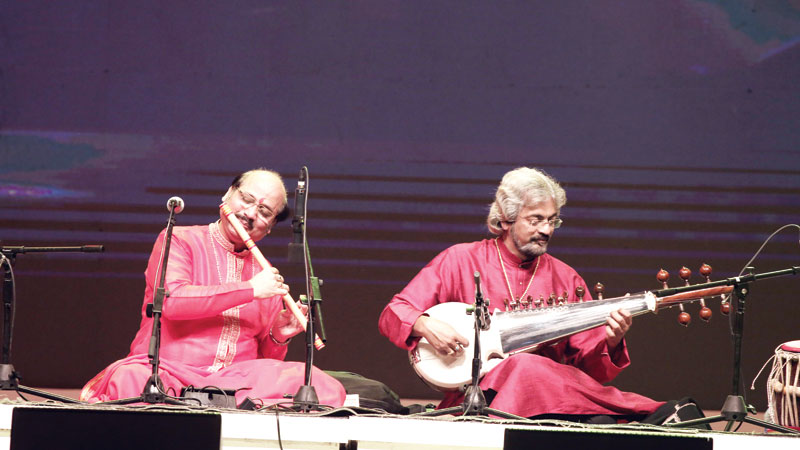 The soulful jugalbandi recital of Pandit Ronu Majumdar and Pandit Debojyoti Bose left the audience spellbound, and the presentation of flute and sarod by the two noted music maestros respectively took the audience to a magical world which the avid music lovers would certainly cherish for a long time.

Eminent flautist Pandit Ronu Majumdar and noted sarod player Pandit Debojyoti Bose were the final performers of the second day of the sixth edition of ‘Bengal Classical Music Festival’. The five-day festival is going on in full swing, bringing hundreds of audiences to the capital’s Abahani Field in Dhanmondi every night. Beginning on December 26, the festival will continue till December 30.

Ronu Majumdar and Debojyoti Bose were accompanied by Pandit Abhijit Banerjee and Pandit Yogesh Samsi on the tabla during the performance. The duo performed Raga Ahir Bhairav and concluded their performance a Bhatiali dhun. On the whole, the audience enjoyed their jugalbandi recital to the fullest, which may make them wait for next one year to enjoy the duo’s fascinating performance in the next edition of the world biggest classical music festival once again.

On the other hand, another divine performance of the second day also mesmerised the audience earlier in the same night, which was Santoor by acclaimed music maestros Pandit Shivkumar Sharma. Pandit Yogesh Samsi accompanied him on the tabla and Takahiro Arai was on the tanpura. He performed Raga Jhinjhoti, Alap Jor Jhala.

However, the second day of the ‘Bengal Classical Music Festival’ began with Kathak by Aditi Mangaldas Dance Company, while the second performance was a tabla recital by the students of Bengal Parampara Sangeetalay, under the guidance of Pandit Suresh Talwalkar.

Ustad Shahid Parvez Khan was the next performer of the night. He performed Raga Bageshree on the Sitar. Abhijit Banerjee accompanied him on the tabla.

The penultimate performance of the night was Dhrupad by Avijit Kundu of Bengal Parampara Sangeetalay. Sukhad Munde accompanied him on the Pakhawaj and Jatyasree Roy Choowdhury and Tinku Kumar Sheel were on the Tanpura as he rendered Raga Behag.