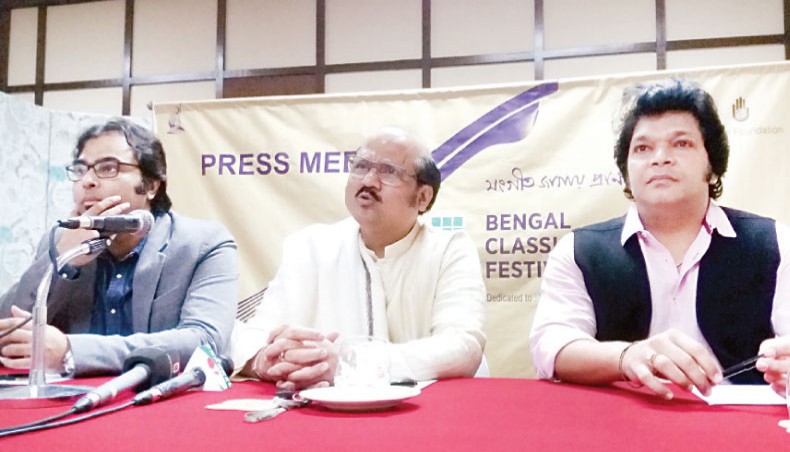 Famous Indian classical musicians highly praise Bangladeshi audience saying that they feel amazed seeing people enjoy classical music in nightlong open air concerts.
For classical music, they said, Bangladesh has such an amazing audience that is not found even in India. And the ‘passion for classical music’ of this huge crowd in Bangladesh encourages them to come to perform in open air music festivals in Bangladesh, said three leading Indian musicians at a press conference held at Pan Pacific Sonargaon, Dhaka on Tuesday.
They are visiting Dhaka to participate at the sixth edition of Bengal Classical Music Festival organised by Bengal Foundation at Abahani Limited’s playground in Dhanmondi.
Sharing their experiences of performing in different open air concerts in Bangladesh; Indian sitarist Purbayan Chatterjee and flutists Rakesh Chaurasia and Ronu Majumdar said the responses that they get from the audiences in Bangladesh are unique and amazing. They are ‘culturally and musically very rich’, Indian musicians said.
‘Bangladesh has set great examples by organising great music festivals like Bengal Classical Music Festival, Dhaka International Folk Festival, Jazz festival and Sufi Festival. The country has secured a special position in the global cultural calendar and has become a well-sought destination for musicians from across the world,’ said Mumbai-based sitarist Purbayan Chatterjee.
‘Many Indian organisations’, Purbayan said, ‘are following the formats like the way open air music festivals are organised in Bangladesh, where the audience get access by free online registration. These festivals are creating opportunities for musicians from across the world to perform in presence of a huge crowd ’
Mumbai based flutist Rakesh Chaurasia, said, ‘Though I performed in Dhaka before, I felt hounoured after getting invitation for performing at the Bengal Classical Music Festival. I heard a lot about the festival from my Babuji.’
Rakesh Chaurasia, student and nephew of flute maestro Pandit Hariprasad Chaurasia, calls the latter Babuji.
Another renowned West Bengal-based renowned flutist Pandit Ronu Majumdar said he always feel thrilled performing in front of thousands of viewers in live shows in Dhaka.
‘I heard many renowned Indian musicians also praise a lot about Bangladesh and Bangladeshi audience,’ Ronu said.
‘Huge crowd attend in pop or fusion music festivals organised in many countries of the world. But, Bengal Classical Music Festival organised in Dhaka is unique in terms of number of audience members,’ Ronu added.
Rakesh Chaurasia and Purbayan Chatterjee had a duet show on the opening day of the Bengal Classical Music Festival on Tuesday while Ronu Majumdar will have a duet show with Sarod player Pandit Debojyoti Bose today at the festival.
Ronu Majumdar, Rakesh Chaurasia and Purbayan Chatterjee had earlier solo and duet shows in India and other countries of the world.
They said that they perform duets on special occasions. They said duet performances depend a lot on the relation and understanding of the performers. It is no competition but collaboration, they said.