Zahangir Alom
It was a mesmerising game of melodies incorporating ragas and rhythms that world’s finest music maestros presented in the five-day Bengal Classical Music Festival, which wrapped up on a high note early morning today.

The festival, held at Bangladesh Army Stadium in the city, was aimed at promoting, nurturing and disseminating the essence of classical music to every nook and cranny of Bangladesh. This year’s festival was dedicated to the memory of ambidextrous litterateur Syed Shamsul Haq.

Organised by Bengal Foundation and presented by Square, the fifth edition of the festival was partnered with BRAC Bank and Maasranga Television. 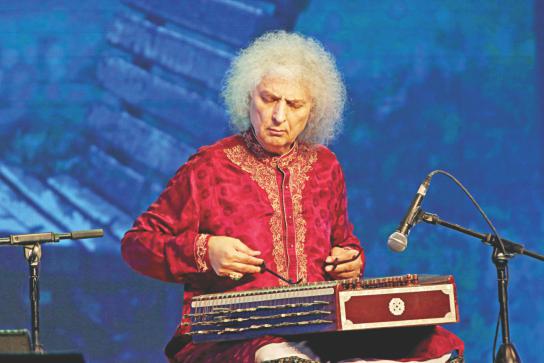 Pandit Shiv Kumar Sharma, one of the most influential artistes of Indian Classical Music of the 20th century, performed in the concluding night’s musical proceedings.

One of the biggest ambassadors of the classical music festivals, conferences and concerts worldwide, the forerunner of the classical santoor started off his recital with playing Raga “Jog”. His vilambit composition was set on Rupaktaal (seven beats) and drut composition was on teentaal (16 beats). Tabla artiste Pandit Yogesh Samsi accompanied the evocative recital producing sweet melodies and rhythms. The maestro later performed a Pahadi dhun that swayed the audience blissfully.

“Syed Shamsul Haq, to whom the festival was dedicated this year, was a versatile genius in the fields of Bangla literature after Rabindranath. If I am lucky enough to live until 85, I’ll consider myself privileged to be able to attend the 10th edition of Bengal Classical Music Festival. It is from our land that towering maestros such as Ustad Allauddin Khan, Ustad Ali Akbar Khan, Ustad Vilayat Khan and Pandit Ravi Shankar were born, and it is from this land that maestros as such will emerge again,” said Sir Fazle Hasan Abed.

Prof Anisuzzaman said, “This festival is a reflection of our cultural conscience, and the Bengal Parampara Sangeetalay is the living proof of our eagerness towards classical music and the devotion with which we are pursuing it.”

Abul Khair Litu, chairman of Bengal Foundation, thanked all who were present and had worked for the event. He also expressed his endless gratitude and hoped for their unhindered support for future endeavours.

He proposed to construct cultural institutions to nurture the artistic abilities of the youth. In response to a spirited speech by Sayeed Khokon, Abul Khair declared that a three-day Sufi festival would be organised in Bangabandhu National Stadium in January next year.