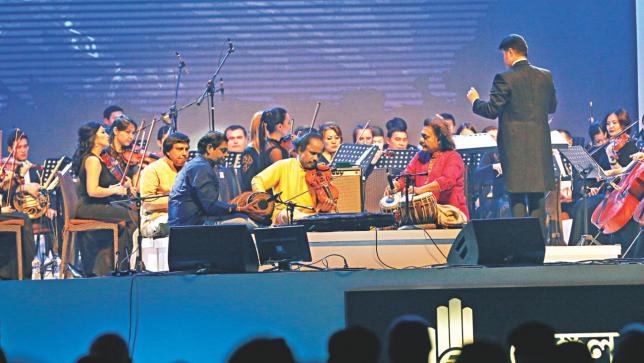 The Bengal Classical Music Festival set sail yesterday evening at the Abahani ground in the capital overcoming major obstacles that had one point seen this sixth edition cancelled. But in a big sign of assurance, Finance Minister AMA Muhith in his chief guest’s address promised to find a solution so that such issues do not arise in future.

Away from the Army Stadium, its home for the last five years, the festival greeted audiences at the new venue with familiar professionalism and efficiency, with the ground itself transformed to meet the needs of hosting tens of thousands of audience for five entire nights.

Virtuoso violinist L Subramaniam opened this year’s festival, with assistance from accompanists on tabla, mridangam and morsing. He performed a kriti (a compositional format of Carnatic music) on Raga Abhogi, a Carnatic (South Indian) raga that has also been adopted into Hindustani (North Indian) classical form.

The Astana Symphony Philharmonic Orchestra from Kazakhstan took the stage next, marking the first-time Western Classical music being played at the festival. They began with a short composition by a noted Kazakh composer, and then performed famous Russian composer Pyotr Ilyich Tchaikovsky’s “Swan Lake”, one of the most popular ballet compositions in the world. The strings, woodwinds, brass and percussion sections created a marvellous symphonic soundscape by the waving of the wand by its artistic director, Berik Batyrkhan.

Subramaniam then came back on stage with his ensemble to perform with the Orchestra, creating a unique bridge between the East and West with a riveting composition titled “Shanti Priya”.

In his address, Abul Khair thanked the finance minister, cultural affairs minister and Salman F Rahman for their support and assistance in making the festival possible this year. “We wanted to break the tradition of dedicating the festival to only those who have left us, and that is why we dedicate this year’s festival to Professor Emeritus Anisuzzaman. I would like to announce that whether I am here or not, if Bengal Foundation organises this festival in the next three years, we will dedicate it to AMA Muhith, Sir Fazle Hasan Abed, and Sanjida Khatun respectively,” he said.

In his address, AMA Muhith said, “This year, the festival was in doubt at one point due to a venue crisis. I want to allot an open space inside the metropolitan area so that festivals and events like this can be held at a reasonable cost. I hope I will get the support of everyone concerned regarding it.” He also expressed hope that a Bangladeshi symphonic orchestra can be established soon, that can represent Bangladesh.

The night’s next performer was Rajrupa Chowdhury, who performed Raga Anil Madhyam, a raga created by her guru Pt Sanjoy Banerjee, on the sarod. With khyal vocals by Vidushi Padma Talwalkar, sitar by Firoz Khan, khyal vocals by Supriya Das (of Bengal Parampara Sangeetalay), and a flute-sitar jugalbandi by Rakesh Chaurasia and Purbayan Chatterjee yet to follow, a large audience settled in at the new venue, enjoying the cool December air while socialising.