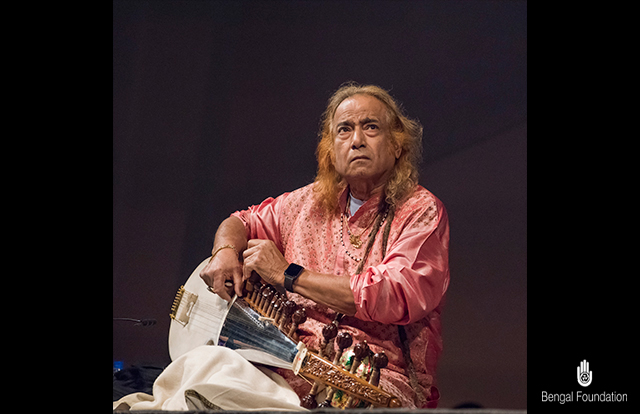 Aashish Khan is a distinguished sarode artist from India. He comes from a family of notable musicians in the realm of Indian classical music; he is the grandson of Ustad Allauddin Khan (was born in Shibpur, Brahmanbaria, Bangladesh), son of Ustad Ali Akbar Khan, and nephew of Annapurna Devi. Khan was initiated to North Indian classical music by his grandfather and he continued his training under the guidance of his father and aunt. Apart from a successful career in music as a performer and composer, Khan is also an adjunct professor of Indian classical music at the California Institute of the Arts, and the University of California at Santa Cruz, United States.
Ashish Khan is a founding member of the Indo-American musical group, ‘Shanti’, with tabla player Ustad Zakir Hussain in 1969, and later with the fusion band ‘The Third Eye’. He has performed extensively in both India and abroad, with numerous distinguished artists which include John Barham, George Harrison, Ringo Starr, Eric Clapton, and many others. Khan is a recipient of the Fellowship of the Illinois Arts Council, Sangeet Natak Akademi Award, and a Grammy nomination. He also became the first ever Indian classical maestro to become a Fellow of the Royal Asiatic Society of Great Britain and Ireland in 2007.