After a while, the lines between genres are blurred – Shashank Subramanyam

Fahmim Ferdous
Shashank Subramanyam started playing flute in the professional circuit at the age of six, and was registered as an ‘A’ grade artiste of All India Radio and Doordarshan TV at age 13. The4 prodigous Carnatic flautist has since played with world-famous musicians of various genres and was nominated for a Grammy for “Floating Point”, his album with Blues legend John McLaughlin. After his debut at the Bengal Classical Music Fest, he sat down with The Daily Star. 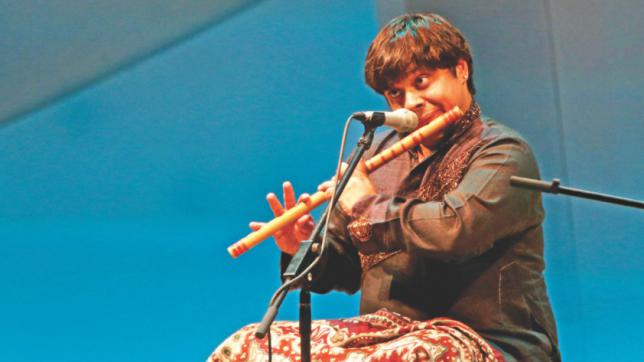 How was your first impression of the Dhaka audience?

Shashank: It was fantastic. I heard a lot about this festival. And in my career of 30 years, this is the first time I got to perform in Bangladesh. It was a magical experience.

You have collaborated with international artistes of great stature. When you’re performing with someone from a different genre, how does it play into your musical stylistic elements?

Shashank: When you perform with someone else, after a while, lines between music melt; it becomes Indian music — and then, just music. That is why musicians who collaborate a lot, often cannot restrain themselves to a particular genre in its hardcore sense. You always mingle with different musicians and try to understand where they are coming from, and try to blend with them.

You have developed a number of unique flute playing techniques. How do you go about developing these, and discovering new aspects of the flute?

Shashank: For someone like me who started professionally at six years old, I had to face many challenging situations; many times I was found lacking. Maybe I could not mingle well with a violin, or I was playing with a faster instrument, like the sitar. All these encounters, kind of leads you into inventing new things. It’s not something I have tried to do intentionally. Wherever I felt I had to do something new, things happened. It is important to keep working on it.

Many flute players look up to you for these innovations you have done. How can they learn these techniques?

Shashank: These techniques have a musical background. As an audience, you are only seeing the surface. But to learn it, they have to learn the technical background also, and not the technique alone. They need to know why that technique came about. It is possible. I teach many students, and some of them are able to do it.

You’re a Carnatic flautist but you have trained in Hindustani Classical as well. Can you tell us of a few distinctions between Carnatic and north Indian flute, and music?

Shashank: I specialize in Carnatic but I also trained in Hindustani music for knowledge. The very music is different in the two forms. The interpretation of ragas is different. North Indian flute is a six-hole flute, mine is an eight-hole flute. In Carnatic, we are more trying to reproduce the gayaki (vocal) style in its actual sense. All our compositions are made for vocal that we try to perform instrumentally, whereas in North Indian music, there are compositions for meant for specific instruments. There are many differences in the way we improvise. Also, South Indian music is rhythm-wise very strong. It has very complex rhythms, and we have to undergo strict rhythm training.