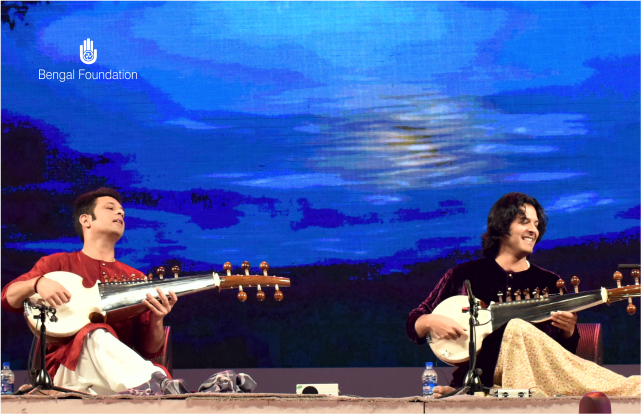 Amaan Ali Khan (born in 1977) and Ayaan Ali Khan (born in 1979) represent the seventh generation of a musical lineage known as the Senia Bangash School. The brothers, who are disciples of their illustrious father, Amjad Ali Khan, stepped into the world of music at a very early age. Amaan and Ayaan both made their debut at the age of eight and have been performing together with their father since the early 1980s, both in India and abroad. Their extraordinary partnership and collaboration has seen the creation of albums like ‘Moksha’ in 2005 which was nominated for the Grammy award; and ‘Truth’ in 2006 for which they received a letter of appreciation from the Indian President. The brothers have also released two books which received favourable reviews. Amaan and Aayaan’s long list of accomplishments also include performing at venues like Carnegie Hall and the Kennedy Centre in the United States. They are considered two of the finest sarod players today and are an inspiration for the younger generation of musicians.