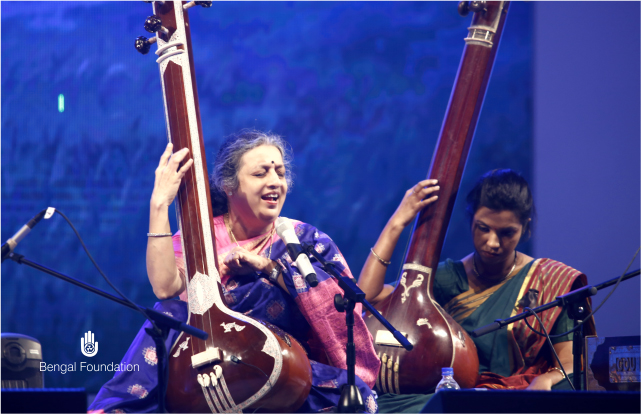 Ashwini Bhide is a distinguished vocalist from India. She represents the Jaipur-Atrauli Khayal Gayaki tradition and began her training under the guidance of the late Pandit Narayanrao Datar. Bhide continued her practice under her mother and guru, Manik Bhide, and the late Pandit Ratnakar Pai. Thoroughly grounded in the Jaipur Atrauli Khayal Gayaki tradition, Ashwini has developed into an artist of immense public acclaim – earning high praise from critics and music aficionados. Bhide’s debut recording album was released in 1985, followed by several more over the years. She has performed at prestigious shows in India and abroad. Bhide’s contribution to Hindustani classical vocal music has been acknowledged by way of awards and citations. She is a recipient of the Government of Maharashtra Sanskritik Puraskar, the Sahyadri Doordarshan Sangeet Ratna Puraskar, Pandit Jasraj Gaurav Puraskar and Rashtriya Kumar Gandharva Samman.