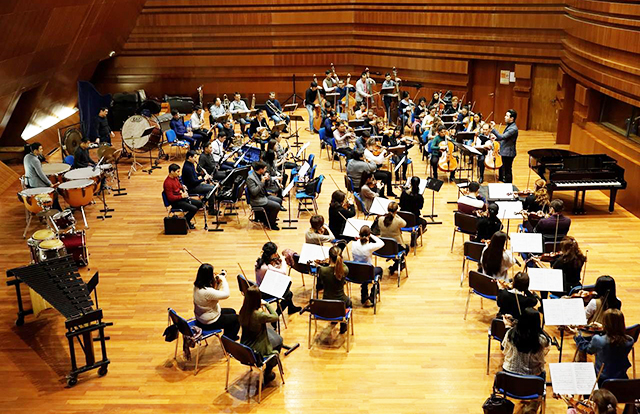 Symphonic orchestra of the State Academic Philharmony of Astana, founded in the year of 2000, is considered to be one of the most notable orchestras of Kazakhstan. Berik Batyrkhan, Artistic Director, and Ernar Nurtazin, Chief Conductor, are laureates of many international competitions. Astana Philharmonic Orchestra has collaborated with many distinguished conductors including the likes of K Penderecki, V Ashkenazy, R Gutter, A Tchaikovsky, R Kanetti, and D. Brosse, amongst others. The ensemble is also known to perform with musicians such as Placido Domingo, liana Isakadze, Vladimir Krainev, and Denis Matzuev.
In 2011 Astana Symphony Philharmonic Orchestra took part in a world premiere of the first Arabic musical ‘Praksa’ of H Gabor, alongside Opera Theatre of Egypt. The ensemble has extensively toured in Kazakhstan, as well as in Germany, Italy, Greece, and Egypt, amongst other places.