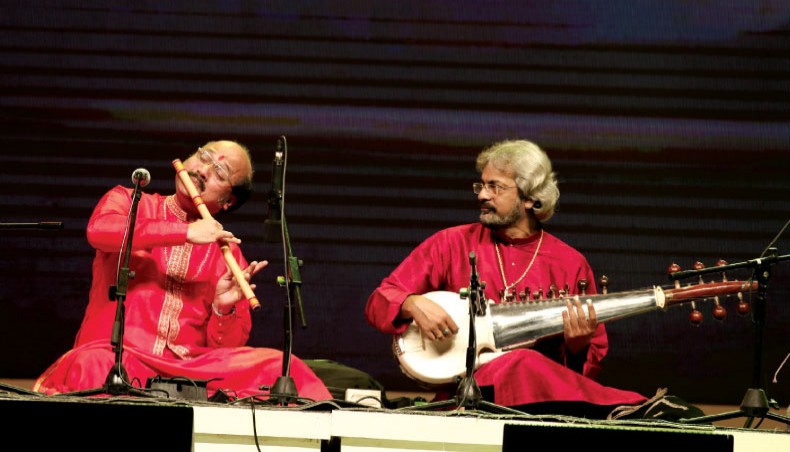 Classical music lovers had an exceptional experience on Thursday dawn at Abahani Limited’s playground in Dhanmondi as the eminent Indian flautist Pandit Ronu Majumdar and sarod player Pandit Debojyoti Bose in a duet performance played the morning raga Ahir Bhairav just before the sun split its rays in the eastern sky.
It was an exceptional experience for the over ten thousand music lovers present till the end of the nightlong show as for the first time they had the experience of a duet recital of sarod and flute, which had been played by two seasoned musicians.
Debojyoti Bose, who got training on North Indian and South Indian ragas and acquired the ability of fusing both styles in live shows, had tremendous chemistry with Ronu Majumdar, who has vast experiences of playing with big names of Indian classical music scene.
Encored by the audience they also played an improvisational recital based on traditional bhatiyaly music genre of Bangladesh. And their unique collaboration created such a soothing sound in the calm dawn of Dhaka that could refresh the minds of the audience members, who left the place with full satisfaction.
It was the end of the second day’s show of the five-day Bengal Classical Music Festival organised by Bengal Foundation featuring around 250 musicians from Bangladesh, India and Kazakhstan.
It is sixth edition of Bengal Classical Music Festival, which is considered as one of the biggest musical shows in the world.
The second day’s show began on Wednesday evening with a kathak dance recital by Aditi Mangaldas’ Dance Company.
It was followed by a tabla recital by the students of Bengal Parampara Sangeetalay, under the guidance of pandit Suresh Talwalkar. Prashanta Bhowmik, Supantho Majumder, M J Jesus Bhoobaun, Fahmida Nazneen, Nusrat-E-Jahan and Shrestha Priyodarshini performed in the group recital.
The next bespoke performance of the night was Santoor by pandit Shivkumar Sharma. Pandit Yogesh Samsi accompanied him on the tabla and Takahiro Arai was on the tanpura. Sharma presented raga jhinjhoti, alap jor jhala.
Pandit Ulhas Kashalkar, accompanied by Suresh Talwalkar on the tabla, presented khyals based on raga jogkauns and raga sohini, while ustad Shahid Parvez Khan performed raga bageshree on the sitar.
The penultimate performance of the night was Dhrupad by Avijit Kundu of Bengal Parampara Sangeetalay. Sukhad Munde accompanied him on the pakhawaj and Jatyasree Roy Choowdhury and Tinku Kumar Sheel were on the tanpura as he rendered raga behag.