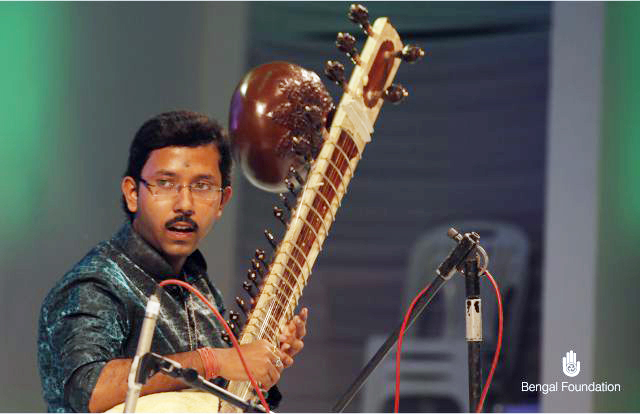 Born on 16th October 1990, Ayan Sengupta belongs to a musical family. His grandfather is a vocalist and a disciple of the late Shri Kanai Das Bairagi and late Ustad Munawar Ali Khan, while his father, Shri Asis Sengupta is a tabla player. Ayan has several achievements in music to his credit. He received the National Talent Search (CCRT) Scholarship in 2003, stood 2nd in the National Youth Festival in Hyderabad in 2005, stood 1st in the Rajya Sangeet Academy competition in 2006 and that of All India Radio Competition in 2007. He has also stood 1st in the Dover Lane Music Competition in 2007 and 2nd in Jnana Prabha Competition conducted by Sangeet Ashram in 2010. His performances include the Children’s Conference in 2003, Nada Brahma Sangeet Sammelan, Salt Lake Cultural Association, NCPA in Mumbai in 2008 and 2011. He has also performed on the Jalsaghar program on Tara TV. Ayan is currently in his 2nd year of college, doing his B.A. Honours in Instrumental Music at Rabindra Bharati University. He has joined ITC SRA as a scholar from 1st May 2011, training under ITC-SRA guru, Partha Chatterjee. Ayan has recently become an ‘A’ graded artiste of All India Radio and Television.