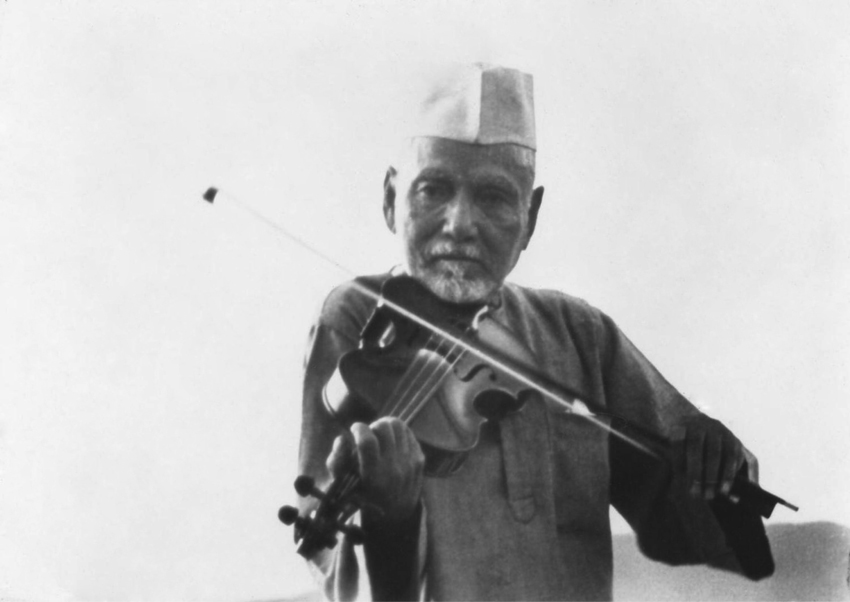 The entire and integral life of Baba Allauddin Khan, the grand old man of Hindustani classical music, has revolved around three aspects: an unending quest for acquiring true musical knowledge, nurturing the knowledge to the highest level of perfection and imparting extensive taalim(knowledge) to his deserving disciples (Shagirds). He did not inherit music. His life is an authoritative and a bona fide chronicle of endless tests, trials and tribulations and he found his way towards knowledge and enlightenment. This experience is probably what bred such a strong antipathy towards a mean and narrow method of teaching. He was a teacher incarnate. Baba Allauddin Khan was an institution in himself.

Baba Allauddin Khan was born in 1862 in the village of Shibpur of Tripura district, now in Bangladesh. His father Sadhu Khan and elder brother Fakir Aftabuddin Khan initiated his musical journey.

An insatiable thirst to pursue musical knowledge made him part his residence at the age of eight.

The first forty years of Baba’s life were full of adventure, and he passed by many unusual, almost unbelievable experiences to achieve his intense quest and love of music. He was about fifteen when he arrived in Kolkata and found a loving guru in Gopal Chandra Chakravarty, a leading dhrupad, dhamar and khayal exponent. He taught him elements of the tabla, pakhawaj, and vocal music. He arduously devoted himself to his study. Unfortunately, after only seven years or so, his guru passed away. With a vision of being an instrumentalist, he became a student of Amritlal (Habu) Dutta, music director at Kolkata’s Star Theatre. At this time, he also took lessons in European classical violin from Mr. Lobo, a bandmaster from Goa. All through his sojourn in Kolkata, Baba Allauddin Khan became actively involved with instrumental orchestras and the Bengali stage.

Few years later, in his twenties, Baba Allauddin Khan witnessed a performance by celebrated Sarodist, Ustad Ahmed Ali Khan at the royal court of Muktagachha (now in Bangladesh). Until then, he did not have a spectacle of the instrument which Ustad Ahmed Ali Khan played- the Sarode. Baba Allauddin Khan persuaded Ustad Ahmed Ali Khan to teach him this instrument, sarode and followed his new guru to Dinajpur, Bengal since, the Ustad was a court musician in Dinajpur. He followed him to Dinajpur and then to Rampur, devoting and dedicating himself to sarode. Finally, the guru felt that it was time, his talented student moved on. Baba Allauddin Khan employing rather desperate measures, managed to become a Ganda-Bandhan (sacred thread tied by the Guru to disciple to bespeak a life-long bond between them) disciple of the court musician of Rampur, the great Binkar Mohammed Wazir Khan. Baba Alauddin Khan was made the official disciple of the Senia Gharana with his recommendation. Meanwhile, he joined the Rampur State Band as a violinist and also learned Dhrupad, Dhamar, Hori and to play different instruments like the Sur-Shringar, Senia Rabab from his Guru Mohammed Wazir Khan Sahib in parallel to the Sarode.

He was subsequently appointed as a court musician and Guru by Maharaja Brijnath Singh of Maihar State, and eventually settled down in Maihar, Madhya Pradesh. During his tenure in Maihar, Baba Allauddin Khan consistently taught the vocal style of Dhrupad, Dhamar, Hori, Tappa, Khyal incorporating techniques of Senia Bin and Rabab in Sarode, Sitar, Surbahar, Violin and other stringed  instruments. Besides Sarode, Baba Allauddin Khan played various other instruments, a phenomenon that shaped his pedagogy.

In 1926 he started his music institution teaching the destitute children, and in due course, transformed his house, ‘Madina Bhavan’, into a centre for music. He designed an orchestra with an ensemble of Indian and Western instruments now known as Maihar Band/Maihar Vadya Vrind.

In 1935-1936 Baba Allauddin Khan joined the dance troupe formed by Uday Shankar, and went on an international tour with the troupe. Occasionally, he also worked at Uday Shankar’s cultural centre at Almora. He visited Santiniketan. On his visit to Santiniketan, Rabindranath Tagore asked Ram Kinkar (sculptor) to create a statue of the maestro. In 1955/56, Ustad Ali Akbar Khan and Pandit  Ravi Shankar introduced and popularized the Maihar Senia Gharana all over the world. Baba Allauddin Khan composed many new raagas like the Madan Manjari (named after his wife), Prabhakali, Swarasati, Shobhavati, Madhavasri, Hem Bhairav, Madhavgiri, Bhagvati, Hemant, Hem Behag and Manjh Khamaj. He created the first Indian orchestra, known as a Maihar Band or Maihar Vadya Vrinda. Since he knew to play many instruments, he knew their tonality and range and could improve upon the sound quality of the instruments like the Sarode, Sitar, Surbahar, Sur Shringar, Seniya Rabab, Chandra Sarang, Sitar Banjo, Nal Tarang (made from steel gun pipes).

In 1955, he established the Maihar College of Music.

In 1958 he received the Padma Bhushan award and  in 1971 he was honored with the Padma Vibhushan award, considered as India’s third and second highest civilian recognitions.

Baba’s last stage performance was in 1959 in Kolkata, and he retired from an active public life and stage in 1961. With a long and luminous life of exceptional creativity behind him, Baba Allauddin Khan lived in Maihar from 1918 until his demise in 1972.

A devoted Muslim, and also a great devotee of Maa Sharada (Saraswati) of Maihar temple and Lord Shiva. His residence has several pictures, images and of Hindu deities and idols. The Films Division’s documentary, ‘Baba’, which depicts different aspects of his life, has also captured the secular and devout Baba.

In terms of magnitude, scope, and the sheer number and quality of performers, Bengal-ITC SRA Classical Music Festival 2012 is the world’s biggest such event. The festival is a joint initiative of Bengal Foundation and ITC Sangeet Research Academy of Kolkata, and is dedicated to the memory of the legendary Ustad Allauddin Khan. Different days of the Festival commemorate other luminaries of music such as Sangeetsadhak Waheedul Haque, Ustad Vilayet Khan, Pandit Uday Shankar and Ustad Ali Akbar Khan, all of whom had their roots in Bangladesh. It is hoped that this annual large-scale festival will help perpetuate and nourish the rich legacy of classical music in Bangladesh.

Bengal Foundation and the ITC Sangeet Research Academy both believe that the wisdom of the average listener is a key factor in guiding the development of music. Classical music is no longer the preserve of the chosen few. Through their joint initiatives, the two institutions are committed to the creation of an informed audience equipped to make responsible choices.  In order to promote and nurture the shared legacy of classical music in Bangladesh, a number of long-term initiatives –  setting up the Parampara School of Music in Dhaka to impart training in a modern interpretation of the Guru-Shiswa style;  organising workshops, festivals and bi-monthly programmes in different districts; providing scholarships and creating opportunities for the participation of talented Bangladeshi performers on important platforms – have been undertaken by the Bengal Foundation and the ITC Sangeet Research Academy.