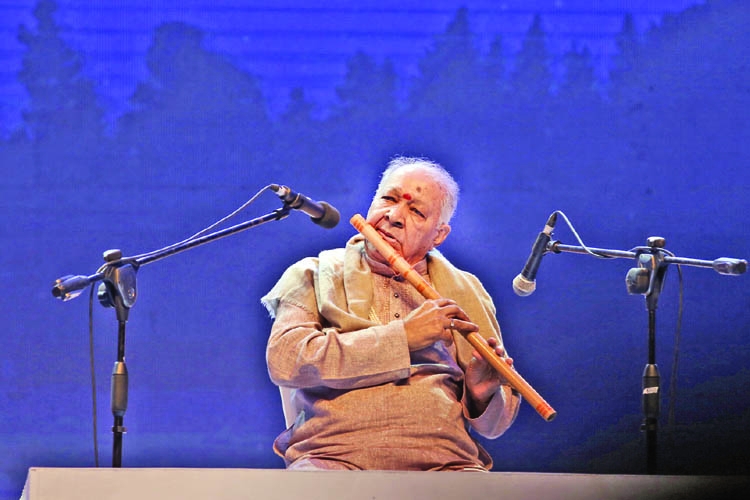 Bengal Foundation organized the festival aiming to popularize and perpetuate the practice of classical music. The maiden performance was Odissi dance recital by Vidushi Sujata Mohapatra with co-artist Soumya Bose. He was accompanied by Soumyaranjan Joshi on flute, Rupak K Parida on Vocal, Ramesh Chanda Das on Violin, Eklabya Moduli on the Pakhawaj. Lights were done by Jaydev Das.

The next performances of the night were Mohan Veena by Pandit Vishwa Mohan Bhatt. Pandit Subhen Chatterjee accompanied him on the Tabla. He performed Raga Maru-Bihag and Dhun.

Brajeswar Mukherjee was the next artiste to enthrall the audience with Khayal rendition where he performed Raga Jog. Pandit Subhankar Bannerjee was on the Tabla and Gourab Chatterjee on Harmonium.

A wonderful Jugalbandi of Sitar by Pandit Kushal Das and Kalyanjit Das enchanted a sea of people at the dead of night. They performed Raga Jogkauns. Artist Monirul Islam and Singer Aditi Mohsin handed over the crest to the performers.

The penultimate performance of the night was Khayal by Pandit Kaivalya Kumar. He performed Raga Gorakh Kalyan and a Thumri in Raga Khamaj. He was accompanied by Sridhar Mandre on the Tabla, Dr Sudhangshu Kulkarni on Harmonium, Kumar Malakar and Abhijit Kundu of Bengal Parampara Sangeetalay on the Tanpura

The concluding performance of the mega festival was Pandit Hariprasad Chaurasia’s mellifluous flute recital. He was accompanied by Pandit Subhankar Banerjee on Tabla, Pandit Bhavani Shankar on the pakhawaj, Vivek Sonar and Uka Nagai on flute and Mushfiqur Islam on the Tanpura.