Pandit Jasraj is one of the most decorated living figures of Indian classical music. The legendary singer is not just a decorated classical vocalist with a vocal range covering three and a half octaves, but also an innovator. And although the maestro will not be physically gracing this edition of the Bengal Classical Music Festival, his musical genius will be there. 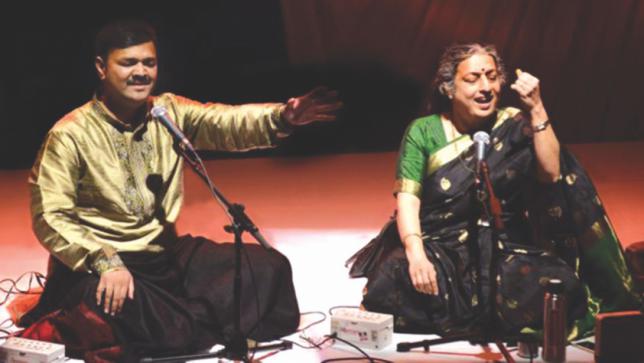 Vidushi Ashwini Bhide-Deshpande will join Sanjay Abhyankar — who happens to be a disciple of Pt. Jasraj, on the first night of the festival for a unique vocal duet — the Jasrangi Jugalbandi. Developed by Pt. Jasraj, it involves two vocalists — a male and a female, singing two individual but musically close Ragas together. The male and the female voices are naturally half an octave apart, and the Jasrangi was developed to protect the tonal quality of both the male and female vocalists in a duet. This novel form of Jugalbandi is based on the ancient melodic principle of Moorchhana — where the Shadja (Sa) of a Raga is shifted and all the other swaras (notes) of the Raga shift accordingly. For example, in the Shadja-Madhyam and Shadja-Pancham techniques, the ‘Ma’ note of the female voice becomes the ‘Sa’ of the male voice, and the male ‘Pa’ becoming the female ‘Sa’.

There are a number of Raga combinations that can be sung in a Jasrangi Jugalbandi, and the duo has performed together, various combinations of Ragas like Nat Bhairav with Madhuvanti and Abhogi with Kalavati. However, a Jasrangi Jugalbandi is not just a duet of the vocalists but also of the accompanying instrumentalists as well, who will pay heed to the other musician playing, but not get lost in it.

Vidushi Ashwini Bhide-Deshpande belongs to the Jaipur-Atrauli Gharana, but also has influences of the Mewati Gharana, and Patiala Gharana. Known for her rendition of Kabir Bhajans and compositions of her own bandish, she performed at the festival in 2014, where she presented Raga Jog and Raga Paraj.

This will be Sanjeev Abhyankar’s first performance at the festival. As a disciple of Pt. Jasraj, he belongs to the Mewati Gharana. He made his singing debut on stage at age 11, and has since performed in 200 cities of the world. He also specialiSes in jugalbandi and has performed with Shankar Mahadevan, Kala Ramnath, Shashank Subramanian and Rakesh Chaurasia, among others.