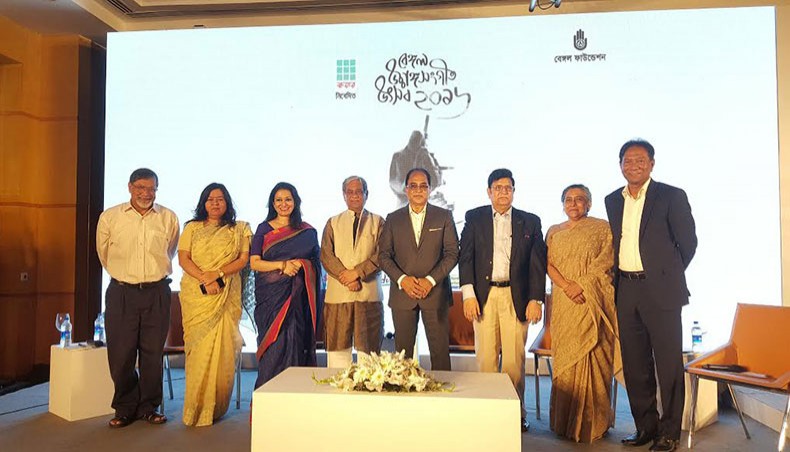 Organisers of Bengal Classical Music Festival pose for a photo at a press conference at Westin Dhaka on Monday. – New Age photo


The fifth edition of Bengal Classical Music Festival, one of the biggest classical events in the region, will kick off on November 24 at the Army Stadium in Dhaka, promising to bring together the best of classical singers and instrumentalists from Bangladesh and India.

With 165 Bangladeshi classical practitioners taking part in this edition, this is going to be by far the largest congregation of local performers in the history of the event, said the organisers at a press conference at The Westin Dhaka on Monday.

Bengal Foundation has been organising the festival since 2012.

‘We have designed this year’s edition in a way that the concertgoers will be able to enjoy performances by the best of classical artistes,’ said Luva Nahid Chowdhury.

Over 200 local and Indian classical artistes are going to perform in the five-day event including big names like Vidushi Girija Devi, Hariprasad Chaurasia, Pandit Shiv Kumar Sharma, Pandit Ajoy Chakrabarthy, Ustad Rashid Khan, and Pandit Ronu Majumder – who had all performed in one edition of the festival or another.

They will be joined by several newcomers including Ashish Khan, grandson of Ustad Ali Akbar Khan, Vidushi Ashini Vide, Madhabi Mudgal, and U Rajesh.

Among the local artistes are danseuse Sharmila Banerjee and her troupe, Munmun Ahmed and her troupe, singer Priyanka Gope and her students at the music department of Dhaka University, and the students of Bengal Parampara Sangeetalay.

Several instruments not featured in the previous editions, such as mandolin, as well as a number of duets will be featured in this edition.

However, despite participating in the initial editions of the festival, no Pakistani artiste will perform this year.

Like the previous years, interested listeners can collect their entry pass free of cost by registering on the Bengal website, or collect it from the office of Bengal Foundation at Banani and Gyantaposh Abdur Razzaq Bidyapith at Dhanmondi.

Registration will begin from the first week of November and passes will be available on the first-come, first-served basis. A total of 50,000 entry passes will be given.

The festival, dedicated to the memory of the recently demised poet-playwright Syed Shamsul Haq, will continue until November 28, each day starting at 7pm and ending at 5am.