Pandit Ajoy Chakrabarty, who performed in all the previous editions of the festival, will present khayal as the day’s last performer. Ajoy is credited with a remarkable musical career with numerous awards and accolades. He received felicitations from both the former and present chief ministers of West Bengal in India. In 2012, the incumbent chief minister Mamata Banerjee conferred him the Maha Sangeet Samman and the Banga Bibhushan, two of the state’s highest awards. In 2015, he received Guru Jnan Prakash Ghosh Lifetime Achievement Award. 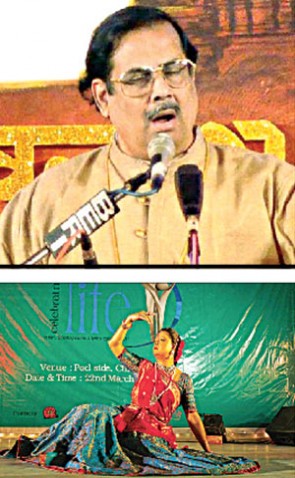 Ajoy is the first Indian classical vocalist to have been invited by Pakistan and China and by BBC for their Golden Jubilee Celebration of India’s Independence. He has more than 100 albums to his credit, published from India, USA, UK, Holland and Germany featuring pure classical and light classical numbers including thumris, dadras, bhajans and other types of devotional songs. Meanwhile, Munmun Ahmed and her troupe will present Kathak dance. Munmun is considered one of the most accomplished dancers in Bangladesh, and runs a dance school called Rewaaz Performing School. She served as the choreographer of dance in the opening ceremony of the 2010 South Asian Games in Dhaka. She is the recipient of the National Award by Shishu Academy and UNESCO Cultural Award, among others.