The biggest classical music festival in the world is back.

Anticipation had been in the air for a few weeks now with mid to late October being the expected time for the announcement for the Bengal Classical Music Festival, an extravaganza of classical music of highest quality that has been the highlight of Bangladesh’s cultural calendar for the last four years. Bengal Foundation, the organisation that had been presenting the festival of colossal scale for, finally made it official yesterday at a press conference at The Westin hotel in the capital: The Bengal Classical Music Festival Bangladesh 2016 will be held from November 24-28 at the Army Stadium, and will be dedicated to eminent litterateur Syed Shamsul Haq. 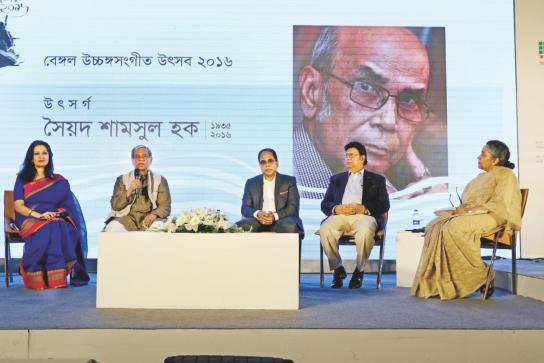 “Due to various unfavourable circumstances, there were concerns over organising the festival, but the government, in an inter-ministerial meeting last month cited the cultural impact and prestige of the international-level festival, and pledged all necessary assistance. Their support as well as people’s interest has motivated us to hold this year’s Bengal Classical Music Festival,” said Director General of Bengal Foundation, Luva Nahid Choudhury, who anchored the press conference. She also gave out the outline of the festival, including the major visiting artistes and Bangladeshi artistes, and Bengal Foundation’s past, present and future activities surrounding the development of classical music.

A brief presentation of a new dedicated website for the festival was next, followed by a brief but emotional audiovisual highlighting the impact of the classical music festival on the people of the country, was shown. Eminent educationist Professor Emeritus Anisuzzaman, noted dancer Sharmila Banerjee, classical vocalist Pandit Ulhas Kashalkar, flute legend Pandit Hariprasad Chaurasia and santoor maestro Pandit Shiv Kumar Sharma spoke in a montage of video messages for the festival. Hariprasad Chaurasia said coming to this festival feels like a pilgrimage to him. Shiv Kumar Sharma said to see the number of audience sitting all night listening to classical music has been a humbling experience for him. Young artistes of the Bengal Parampara Sangeetalay, who will have three group presentations at this year’s festival, then played a classical piece on sitar at the stage. 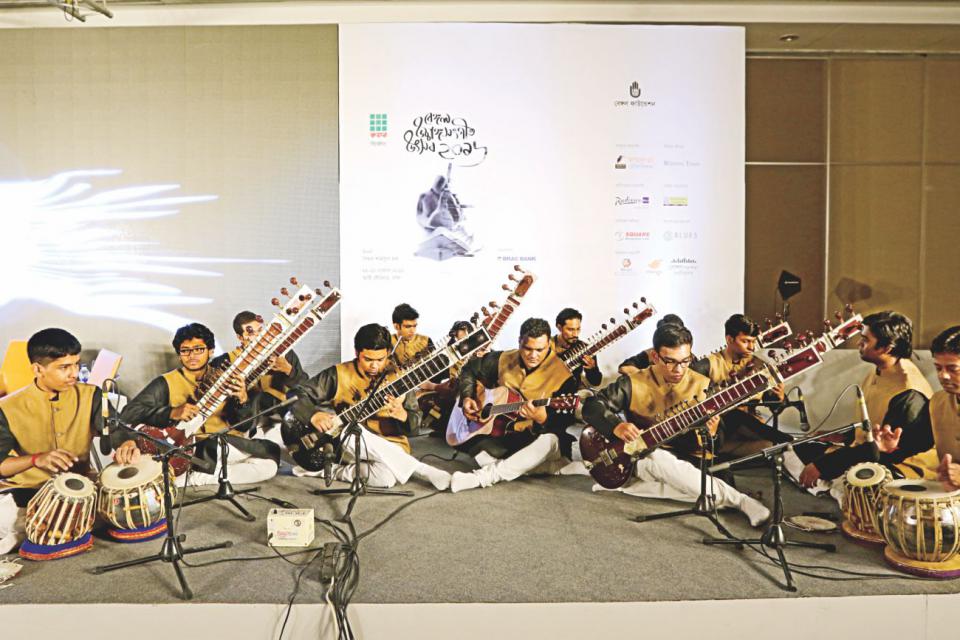 Luva Nahid Choudhury also highlighted other supplementary initiatives of Bengal Foundation surrounding the festival, including an experimental workshop in Khulna, a seminar on “Music as Intangible Heritage” in association with Goethe-Institut, a series of simple lecture demonstrations in Bangla on classical music appreciation (which will be available for the audience at the festival) and a 10-day Bangla Cultural Festival in Sylhet in February 2017.

Dr. AK Abdul Momen, an advisor of Bengal Foundation, said the clarion call to eradicate militancy from the country can only be achieved by a creating a strong cultural conscience, and this festival plays a big role in it.

Zara Mahbub, Chief Communication Officer of BRAC Bank — one of the sponsors of the event — also expressed their continued commitment to the grand event.

Anjan Chowdhury, Managing Director of Square Group, the major sponsor of the event, said Square Group termed the festival “An indicator of Bangladesh’s cultural progress,” and said it was a matter of pride for them to be part of it.

Abul Khair, Chairman of Bengal Foundation, spoke last. He remembered Syed Shamsul Haq, who was the first Director General of Bengal Foundation and was involved with the foundation until his death; and Fahim Munaim, the deceased CEO of Maasranga TV, who was an avid patron of the festival. He said Bengal Foundation has been working in all forms of art – visual art, music, theatre, cinema and architecture, and a combination of all these efforts can bring about a revolution of culture to bring up better human beings.

This year’s festival line-up will see celebrated legendary classical vocalist, the 87-year old Vidushi Girija Devi return to the festival. Violin virtuoso Dr. L Subramaniam will also be performing at this year’s festival for the first time. Ustad Ashis Khan, son of the Ustad Ali Akbar Khan and grandson of the legendary Baba Alauddin Khan, will also be coming to Bangladesh for the first time. A special style of jugalbandi performance, named ‘Jasrangi’ after its inventor Pandit Jasraj, will be another attraction of the festival. In a Jasrangi, a male and a female vocal present two separate but similar ragas simultaneously on stage, and Vidushi Ashwini Bhide and Pandit Sanjeev Abhayankar will perform Jasrangi at the festival. Famed Odisi dancer Vidushi Madhavi Mudgal and her student Arushi Mudgal are also among first-time performers. A number of duet performances will also feature at this year’s festival, the most noted of them being Pandit Ronu Majumdar (flute) and the first Carnatic mandolin player U Rajesh (brother of the eminent mandolin exponent U Srinivas). Other duets will include flautist Praveen Godkhindi and violinist Ratish Tagde and two revered tabla players, Pandit Yogesh Shamsi and Pandit Shubhankar Banerjee will perform together. Celebrated sitarist Pandit Purvayan Chaterjee will return to the festival after a hiatus; Carnatic singers Ranjini and Gayatri, established Carnatic flautist Shashank Subramaniam and khayal singer Artee Ankalikar, vocalists Jayatirtha Mevundi and Kumar Mardur are also on the festival bill.

This year will see a large number of Bangladeshi performers present their music and dance at the festival. Reputed dancer Sharmila Banerjee will lead a 60-member troupe in a presentation of Manipuri, Bharatanatyam, Odisi and Kathak set to Rabindranath’s bhanga and other songs; Munmun Ahmed and her troupe will perform Kathak; one of the most talented classical vocalists of Bangladesh, Priyanka Gope will perform solo, while she will lead a group of Dhaka University’s music department students in a group performance. Mohamamad Shoyeb will also direct an experimental classical vocal performance by Dhaka University students. Students of Bengal Parampara will have three group presentations at the festival – on tabla, sitar and sarod. The youngest performer at the festival at just seven years of age – Ishrat Fuljhuri Khan – will be a part of the sarod ensemble. She is the granddaughter of prominent Bangladeshi esraj player, Ustad Fuljhuri Khan.

Festival regulars Pandit Shiv Kumar Sharma, Pandit Hariprasad Chaurasia, Pandit Ajoy Charkraborty, Ustad Rashid Khan and Pandit Tejendra Narayan Majumder will be performing at the festival, along with a number of old and new faces. The full list of performers is available on the festival web site.

Transport buses from the festival venue will be provided like previous years.

Square Group is presenting the festival, with support from BRAC Bank. Maasranga TV is the broadcast partner; Ice Business Times is the media partner; Radisson Hotel Dhaka will be hospitality partner and Square Hospital is the medical partner. Blues Communications, as usual, will be the event management company, with cooperation from Perfect Harmony, Singapore. Bengal Digital, Mango and Bengal Parampara Sangeetalay are also partners of the event.