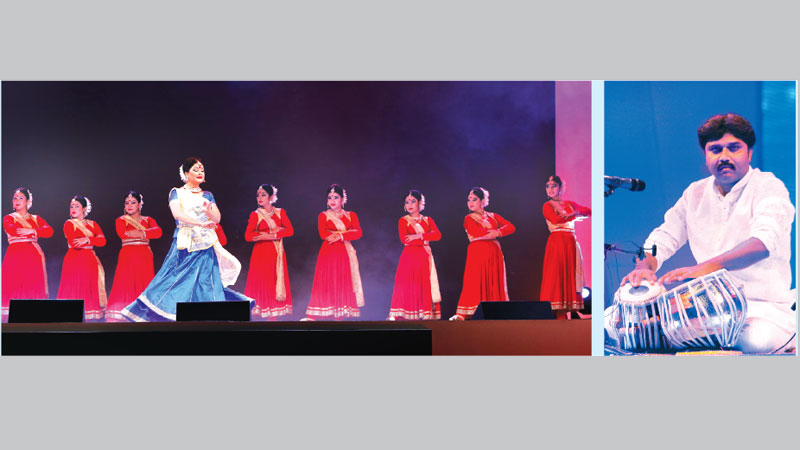 Munmun Ahmed and her troupe (left) and Nilesh Ranadive (right) perform on the fourth day of ‘Bengal Classical Music Festival 2016’ at the Bangladesh Army Stadium in the capital last night. Photo: Jaki Zaman

With the final performance by Pandit Hariprasad Chaurasia, which is also the most-anticipated presentation of the festival, the curtain will come down on the fifth edition of ‘Bengal Classical Music Festival 2016’ (BCMF) tonight. Begining on November 24 at the Bangladesh Army Stadium in the capital, the landmark event– the world’s biggest classical music festival in terms of the number of performers on a single stage, audience capacity and duration–will see its closing with the fascinating flute recital by Hariprasad Chaurasia at 5am (in the early morning of November 29).
Besides, the audience will also get the opportunity to enjoy the thrilling performances by the iconic music maestros like Pandit Shivkumar Sharma and Kushal Das from India.
On the other hand, performances by the local artistes–vocal presentation by students of the Music Department, University of Dhaka and sitar by students of Bengal Parampara Sangeetalay—would also be a subject of attraction for the audiences as local artistes have already set an impression of international standards with their brilliant performance during the five-day festival.
Earlier, on the third night of the festival, the Carnatic flute rendition by Shashank Subramanyam and sarod recital by students of Bengal Parampara Sangeetalay created magical spells on Saturday night.
Yesterday, the fourth night of the festival opened with Kathak dance by Munmun Ahmed and her troupe from Bangladesh. Other performances of the night were—Tabla by Nilesh Ranadive, Khayal by Jayateerth Mevundi, Duet (Tabla) by Pt Yogesh Samsi and Pt Subhankar Banerjee, Duet (Carnatic vocal) by Ranjani & Gayatri, Sarod by Pt Tejendra Narayan Majumdar and Khayal by Pt Ajoy Chakrabarty.
This year, a total of 165 Bangladeshi artistes and 82 Indian artistes have been scheduled to perform on one stage during the five-day extravaganza.
Presented by Square, this year’s ‘Bengal Classical Music Festival’ has been dedicated to ambidextrous poet-writer Syed Shamsul Haq who passed away recently. Beginning at 7pm today evening, the festival is set to conclude at 5am (in the early morning of November 29).