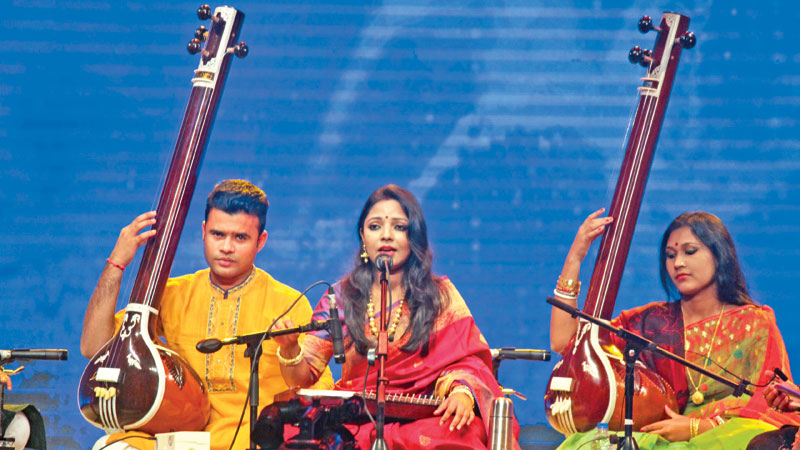 A huge number of enthusiasts waiting in long queues with immense patience and cooperating with the security personnel at the gates of the venue—the picture itself is well enough to say that whatever the crowd is waiting for must be something special. Yes, this was the exact situation found at the army stadium in the capital yesterday where people were seen waiting eagerly to enter the venue to experience the bliss of classical music brought to the city again—the fifth time to be exact—by the Bengal Foundation. The 2016 edition of the ‘Bengal Classical Music Festival-BCMF’ has already been a big hit among the enthusiast although it was only the second day yesterday. This year’s edition has been dedicated to late poet-writer Syed Shamsul Haq.
After the inaugural day, classical music maestros from home and abroad continued to enthrall the Dhaka audience on the second day of the festival. The performance of the second day began with the fascinating Odissi dance number by Indian dancer V Madhavi Mudgal and her troupe. Then, the second presentation of the second night was a group tabla performance by the students of Bengal Parampara Sangeetalay.
Other performances of the second night were— Khayal by Priyanka Gope, Santoor by Rahul Sharma, Vocal presentation by Mohammed Shoeb and others, Sitar by Purbayan Chatterjee, Khayal by Pondit Ulhas Kashalkar and duet performance by Ronu Majumdar on Flute and U Rajesh on Mandolin.
The festival was officially inaugurated on Thursday by Finance Minister AMA Muhith. Other guests included Cultural Affairs Minister Asaduzzaman Noor, Indian High Commissioner in Dhaka Harsh Vardhan Shringla, Managing Director of Square Pharmaceuticals Ltd Tapan Chowdhury and CEO and Managing Director of BRAC Bank Ltd Selim R F Hussain.
Finance Minister Muhith said, “It is a monumental achievement for us that this festival is now the largest classical music event in the world. 87 year old Girija Devi’s performances are the pinnacle of this year’s event. This evolution in our people’s ethos started with a protest when there was an attack on our cultural integrity. To understand classical music one has to acquire the taste to understand the intricacies of this beautiful form of music. Whoever has acquired this taste will never succumb to any sort of violence.”
Asaduzzaman Noor said, “This is a matter of great joy that the festival is taking place despite all the uncertainties.” He remembered those who had given their lives during the Holy Artisan, Sholakia and various other militant attacks.” Finally, he recited a poem by Tariq Suja in remembrance of those deceased during the Holy Artisan attack.