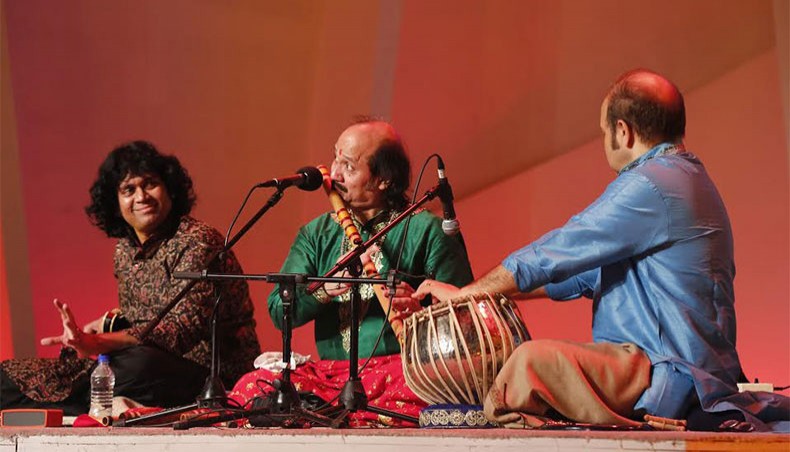 The second night of Bengal Classical Music Festival 2016 ended with a sublime duet performance based on morning raga nat bhairav early Saturday. The performance, with Pundit Ronu Mahumder playing flute and U Rajesh playing mandolin, was witnessed by hundreds of music lovers as dawn broke over the Army Stadium – venue for the five-day event that began Thursday evening. The duo captivated the audience with alternating sounds of pathos and exuberance that characterise the morning raga on the bhairav thaat. It was for the first time that mandolin was played in this fifth edition of the festival, and its pairing with flute made the performance all the more appealing. Before the duet performance, Ronu Majumdar moved the crowd with a solo performance on raga mangal bhairav, another raga of the bhairav thaat. Known as a morning raga expressing hope and rejuvenation, the raga on flute was indeed one of the most enjoyed recitals on the second evening. U Rajesh also gave a solo performance in which he played raga amrit varshini, which is said to bring rain. According to Hindu mythology, Ravana played amrit varshini to bring down rain when Hanuman put Lanka on fire. Earlier, the second night commenced with an Odissi piece by eminent Indian dancers vidushi Madhavi Mudgal and Arushi Mudgal. Afterwards, there were performances by several local classical musicians including Priyanka Gope (vocal) and Shoeb Rahman and his troupe (vocal), as well as Indian masters Rahul Sharma (santoor), Purbayan Chatterjee (sitar) and Pundit Ulhas Kashalkar (vocal).