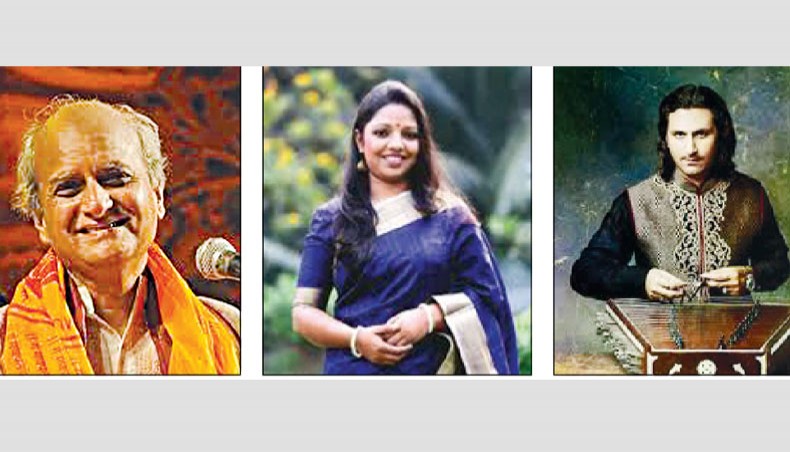 Indian classical maestros Pandit Ulhas Kashalkar and Rahul Sharma as well as noted local singer Priyanka Gope are set to cast a spell over their audience tonight at the Bengal Classical Music Festival 2016, which began on Thursday.
The evening will also include an Odissi performance by Indian classical dancer Vidushi Madhavi Mudgal and her troupe, who will commence the show.
Afterwards, there will be a performance by the tabla students of Bengal Parampara Sangeetalaya, vocal recital by Mohammed Shoeb, sitar recital by Purbayan Chatterjee, and a duet instrumental piece by Pandit Ronu Majumdar (flute) and U Rajesh (mandolin).
Rahul Sharma will play several classical ragas on Santoor – a trapezoid-shaped string instrument.
The 44-year-old, who is also a vocalist, inherited his passion for the instrument from his celebrated father, Pandit Shivkumar Sharma, and has already created a distinct identity for himself with his spontaneous Santoor performance.
He has released several CDs, some solo and some with his father. He also collaborated with international musicians such as pianist Richard Clayderman and keyboardist Kersi Lord.
Meanwhile, Pandit Ulhas Kashalkar, a Hindustani classical vocalist, will present khayal at the show. A music teacher at the renowned ITC Sangeet Research Academy, Ulhas possesses the ability to switch between three
styles – Gwalior, Jaipur and Agra – at times even in the course of a single performance.
Priyanka Gope, on the other hand, will render the beautiful evening raga Bhupali.
Often considered one of the most talented classical vocalists of her generation, Priyanka serves as an assistant professor at the music department of Dhaka University.
The five-day classical festival has been organised by Bengal Foundation.