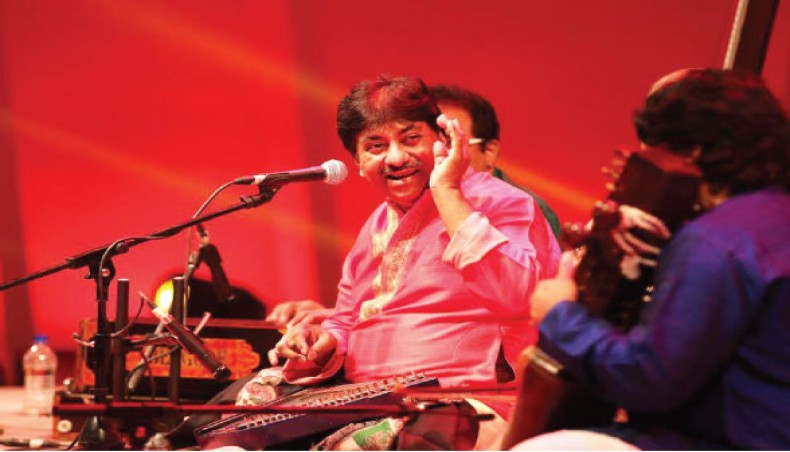 The long wait for Ustad Rashid Khan has paid dividends.
Rashid Khan, a leading light of Hindustani classical music and exponent of the Rampur-Sahaswan gharana, gave an uplifting performance bringing down the curtain on the third night of Bengal Classical Music Festival 2016.
Dawn was about to break when the maestro took the stage, as the night’s last performer, and mesmerised the crowd with thumri and a few ragas.
He was accompanied by Pandit Subhankar Banerjee on tabla, Krishna Bongane on vocal, Ajay Joglekar on harmonium, Murad Ali Khan on sarangi, and Elvin Majumdar and Samin Yasar on tanpura.
He began by presenting the devotional dawn raga lalit.
The next one hour was one of quiet reflection and journey-within for the audience as Rashid Khan presented one raga after another, including the melodious morning raga charukeshi.
It was, however, the thumris that the audience appeared to enjoy most, and their appetite for classical music seemed to have been fully satisfied as they left the venue.
Earlier in the night, the show commenced with a group recital on sarod by the students of Bengal Parampara Sangeetalay, who played a composition based on raga kafi.
Grammy-nominated Indian flutist Shashank Subramanyam performed next, presenting the raga poorvikalyani on his flute.
Dr Prabha Atre, the next performer, presented khayal in raga shaym kalyan and raga madhurokosh, the latter said to have been created by Atre herself.
There was also a tabla recital by Pandit Anindo Chatterjee, dhrupad by Pandit Uday Bhawalkar, and sitar recital by Pandit Sanjoy Bandopadhyay.
The five-day Bengal Classical Music Festival, now in its fifth year, began at the Army Stadium on Thursday evening.