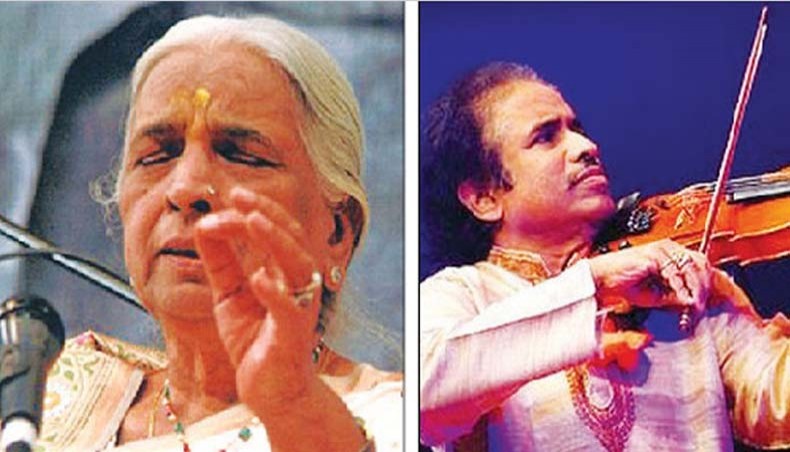 The programme will begin in the evening with the dance recitals by eminent dancer Sharmila Banerjee and her troupe based on different genres of classical forms.
Subsequently, Indian artistes like Pravin Godkhindi, Ratish Tagde, vidushi Girija Devi, ustad Aashish Khan, vidushi Ashwini Bhide Deshpande, pandit Sanjeev Abhyankar and Dr L Subramaniam will present music recitals in the nightlong programme.
Pravin Godkhindi and Ratish Tagde will present duet rendition of flute and violin while Ashwini Bhide Deshpande and Sanjeev Abhyankar will render duet vocal recitals.
Main attractions of the opening day will be presentation by Girija Devi, Aashish Khan and L Subramaniam.
Iconic Indian classical vocalist of the seniya and banaras gharana Girija Devi will present khyal in the evening.
With a career spanning over six decades, Devi has been a guru at the ITC Sangeet Research Academy since its inception and is a recipient of many prestigious awards including the Padma Vibhushan in 2016, Padma Bhushan in 1989, Padma Shri in 1972, Sangeet Natak Akademi Award in 1977 and the Sangeet Natak Akademi Fellowship, among others.
Ustad Aashish Khan is a distinguished sarod artist from India. The grandson of ustad Allauddin Khan and son of ustad Ali Akbar Khan, ustad Aashish Khan started training in classical music with his grandfather and continued his training under the guidance of his father and aunt Annapurna Devi.
Apart from a successful career in music as a performer and composer, Aashish Khan Khan is also an adjunct professor of Indian classical music at the California Institute of the Arts, and the University of California at Santa Cruz in US.
He has performed extensively in both India and abroad with numerous distinguished artistes like John Barham, George Harrison, Ringo Starr, Eric Clapton and others.
The last performer of the night, Dr L Subramaniam will present violin till the dawn.
Trained in the classical carnatic music tradition and western classical music, Subramaniam got acclaim for his virtuoso playing techniques and compositions in orchestral fusion.
Over 200 local and Indian classical artistes are going to perform in the fifth edition of the festival including big names like Hariprasad Chaurasia, pandit Shiv Kumar Sharma, pandit Ajoy Chakrabarthy, ustad Rashid Khan, and pandit Ronu Majumder – who had all performed in one or another edition of the festival.
Among the local artistes are danseuse Munmun Ahmed and her troupe, singer Priyanka Gope and her students at the music department of Dhaka University, and the students of Bengal Parampara Sangeetalay.
Bengal Foundation has been organising the festival since 2012.