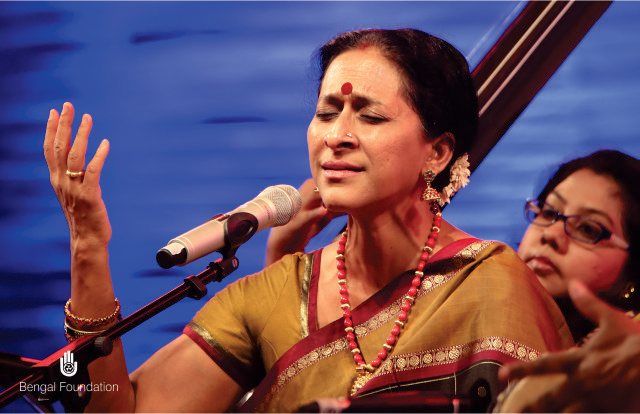 Bombay Jayashri represents the fourth generation of music practitioners in her family. Strengthening her talent with rigorous grooming under the music legend, Lalgudi G Jayaraman and T R Balamani, she is one of the most sought after Carnatic musicians today. Jayashri’s training also involved other forms of performing arts which included Hindustani music, Bharatanatyam and she associated with theatre in her early years.

Jayashri has worked with great maestros in the field of music, dance, fusion, films and theatre; giving her work a place of pride. Amongst numerous titles and awards, her song ‘Pi’s Lullaby’ featured in the film, ‘Life of Pi’, was nominated for the Best Original Song at the Oscars – Academy Awards (2013), Sangeetha Choodamani Award from Dr. A C Muthiah from Sri Krishna Gana Sabha; Shanmukha Sangeeta Shiromani Award by Shanmukhananda Sabha; Bombay and Naadabhooshanam by Shanmukhananda Sangeetha Sabha, New Delhi, are only few of several titles that bear testimony to her contribution in the field of Indian performing arts.