Legendary Carnatic music vocalist Dr. Mangalampalli Balamuralikrishna passed away at age 86 on November 22, his family confirmed. According to reports, he was not keeping well for a while.

Balamuralikrishna was a Carnatic vocalist, multi-instrumentalist, playback singer, composer and actor. He was a recipient of the Padma Vibhushan, India’s second-highest civilian honour, apart from several honours for his contribution towards Indian Art – especially for his work in music. 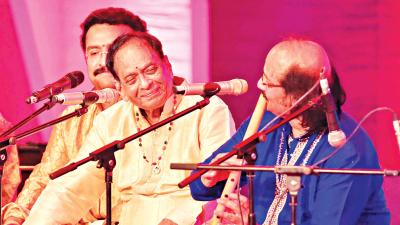 Born in Andhra Pradesh in 1930, he began singing at the age of six and was also good at playing the flute, viola and violin. Bala was made Chevalier of the Ordre des Arts et des Lettres by the French Government in 2005.

Balamuralikrishna performed over 25,000 concerts worldwide. His best collaborations were with legends like Pandit Bhimsen Joshi, Hariprasad Chaurasia and Kishori Amonkar. Balamuralikrishna has also penned over 400 compositions in Telugu, Sanskrit, Kannada and Tamil.

He was considered as child prodigy. At the age of 15, he had mastered all the 72 melakartha ragas and had composed krithis in the same. His compositions range from Devotional to Varnams, Krithis, Javalis and Thillans, in all the fundamental 72 melakartha ragas to film music.

The maestro performed in Bengal Classical Music Festival in 2015 as the senior-most artiste of the festival with noted flautist Pt. Ronu Majumdar.