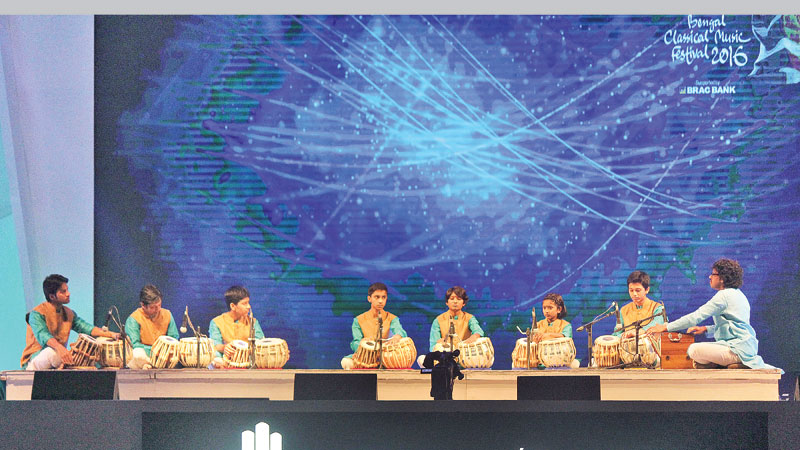 The second night of Bengal Classical Music Festival 2016 opened at the Army Stadium in the capital yesterday with an Odissi dance recital by Vidushi Madhavi Mudgal and Arushi Mudgal. Vidushi Madhavi Mudgal performed dance numbers on Nataraj and Ashtapodi compositions, while Arushi Mudgal performed Ahlad composed on Raaga Sahana. She also performed to “Hemontey Kon Bashonter e Baani”, a song by Tagore. Finally, the duo performed together on the composition Bhairabi Pallabi, according to a press release by Bengal Foundation. Accompanying them were Manikuntala Bhowmick and Khitiprakash Mohapatra on vocal; Jitendra Kumar Swain on pakhawaj, Yar Moho on sitar and Srinibas Satapathy on flute. Professor Emeritus Dr. Anisuzzaman, member of the board of Trustee of Bengal Foundation, handed over the crests to both Madhavi and Arushi and the other members of the troupe. Following this was a group performance by the students of Bengal Parampara Sangeetalay. The troupe included Fahmida Naznin, Supantho Mojumdar, M J J Bhoobaun, Pancham Sanyal, Nusrat-E-Jahan Khushbo, Chinmoy Bhowmik and Prashanta Bhowmik. They performed teen taal on the tabla. Along with them, on harmonium was Milind Kulkarni. These students have been taught by Pundit Suresh Talwalkar. Barrister Moudud Ahmed handed over the crests to the performers. Pundit Suresh Talwarkar expressed his optimism about the bright future of these students. The other performances of the night were Khayal by Priyanka Gope, Santoor by Rahul Sharma, Vocal presentations by Mohammed Shoeb and others, Sitar by Purbayan Chatterjee and Khayal by Pt Ulhas Kashalkar. A duet featuring Pundit Ronu Majumdar (Flute) and U Rajesh (Mandolin) will be the last highlight of the night. Stalls at the festival include both bookstalls as well as vendor stalls offering food and beverage.