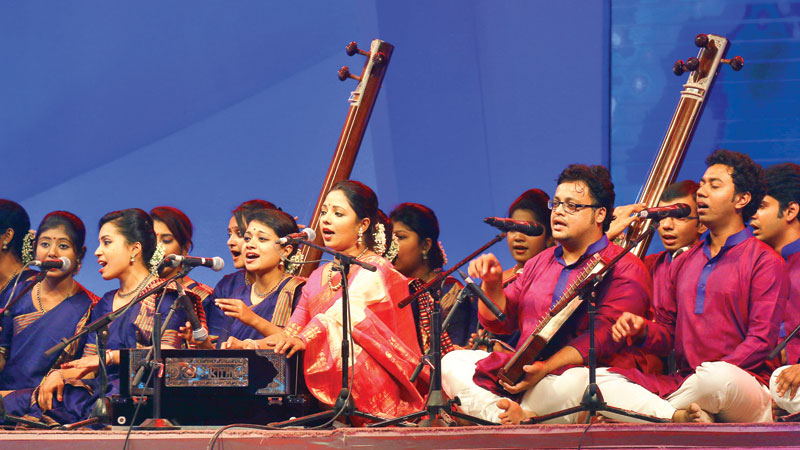 Students of Music Department, Dhaka University enthral the audience with a vocal presentation on the concluding day of ‘Bengal Classical Music Festival 2016’ at the Bangladesh Army Stadium in the capital last night. Independent Photo
The performances by the local artistes earned appreciation on the closing night of the five-day ‘Bengal Classical Music Festival 2016’ at the Bangladesh Army Stadium in the capital last night. The last day of the festival began with a vocal presentation by the students of the Music Department, Dhaka University, while the second performance was sitar recital by the students of Bengal Parampara Sangeetalay. Both the troupes featuring a number of local artistes received appreciation for their performances. The classical music aficionados were cheerful after the presentation of the local artistes as they found Bangladeshi artistes also delivered the brilliant performance of international standards during the landmark event. The other performance of the closing night included Santoor by Pt Shiv Kumar Sharma, Khayal by Kumar Mardur, Sitar by Pt Kushal Das and Khayal by Arati Ankalikar. The festival saw its closing with the fascinating flute recital by Pt Hari Prasad Chaurasia.
Dedicated to ambidextrous poet-writer Syed Shamsul Haq, this year’s festival took place every day from 7pm to 5am that began on November 24. To note, a total of 165 Bangladeshi artistes and 82 Indian artistes performed on one stage during the five-day extravaganza. Besides, 17 foreign artistes performed for the first time at the festival.