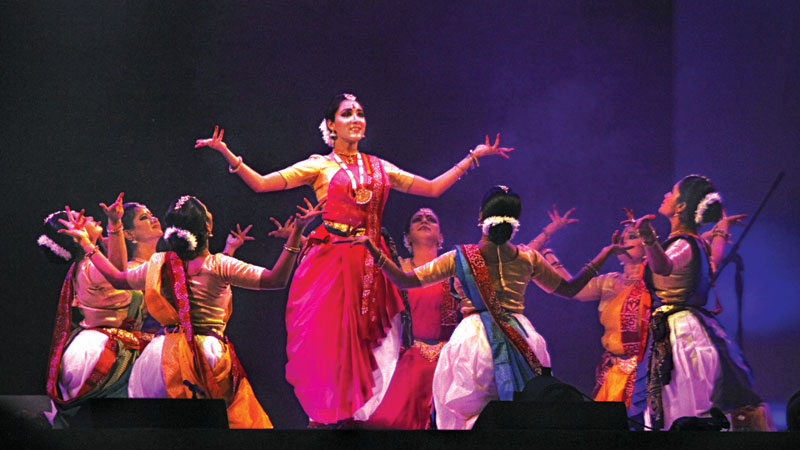 Choreographed by renowned dancer and choreographer Sharmila Banerjee, a group of artistes from Bangladesh perform on the opening day of the fifth edition of ‘Bengal Classical Music Festival 2016’ at the Bangladesh Army Stadium in the capital last night. Photo: Jaki Zaman

The fifth edition of the Bengal Classical Music Festival (BCMF 2016) –the world’s biggest classical music festival in terms of the number of performers on a single stage, audience capacity and duration–began yesterday evening at the Bangladesh Army Stadium in the capital. Presented by Square, ‘Bengal Classical Music Festival 2016’ has been dedicated to ambidextrous poet-writer Syed Shamsul Haq who passed away recently.
The festival began with the fascinating dance performance by a group of Bangladeshi artistes, which was choreographed by renowned dancer and choreographer Sharmila Banerjee. Then, the second presentation of the inaugural night was a duet performance by Pravin Godkhindi (Flute) and Ratish Tagde (Violin)—two eminent instrumental artistes from India. Other performances of the night were— Khayal by V. Girija Devi, Sarod by Ust Aashish Khan, Jasrangi duet (vocal) by V. Ashwini Bhide Deshpande and Pt Sanjeev Abhyankar and Violin by Dr L Subramaniam. This year, a total of 165 Bangladeshi artistes and 82 Indian artistes will perform on stage during the five-day extravaganza. Besides, 17 foreign artistes will perform for the first time at the festival. The festival, opening at 7pm and closing at 5am, will continue until November 28.