Classical Music Festivals should be held in every district 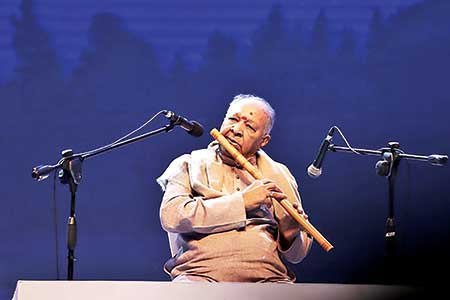 Bengal Classical Music Festival 2017’s 5th and Final Night ended on a mellifluous note presented by Pandit Hariprasad Chaurasia’s heavenly flute recital. The festival ended on December 30 at the Abahani Grounds in Dhanmondi. After the first performance of Oddisi the discussion session to build on the journey of classical music up till now started. Chaired by Professor Emeritus Dr Anisuzzaman the session was attended by BRAC Chairperson Sir Fazle Hasan Abed as the Chief Guest and Chhayanaut president Dr Sanjida Khatun and Aminah Ahmed, mother of Kazi Nabil Ahmed, the Vice President of Abahani Limited among others.

While Aminah stressed on her hopes that from now on Bengal would arrange the festival on Abahani Grounds, Sanjida pointed out that festival of such height should be arranged in every divisional and district level towns.

In his speech, Dr Anisuzzaman said that it’s a matter of pride that every year the classical music festival is reaching a new height, while Sir Fazle Hasan Abed praised the organizers for arranging this mega event despite such uncertainty and various obstacles arising from time to time.

Earlier in the maiden performance Odissi dance recital was presented by Vidushi Sujata Mohapatra with co-artist Soumya Bose. Accompanying them were Soumyaranjan Joshi on flute, Rupak K Parida on Vocal, Ramesh Chanda Das on the Violin, Eklabya Moduli on the Pakhawaj. Lights were done by Jaydev Das. Asaduzzaman Noor, Minister of Cultural Affairs handed the crest to the artiste.

The next performances of the night were Mohan Veena by Pandit Vishwa Mohan Bhatt; Pandit Subhen Chatterjee accompanied him on the Tabla. He performed Raga Maru-Bihag and dhun. Attorney General Mahbubey Alam handed the crest to the artiste.

Brajeswar Mukherjee was the next artiste to enthrall the audience with Khayal rendition where he performed Raga Jog. Pandit Subhankar Bannerjee was on the Tabla and Gourab Chatterjee on the Harmonium. Eminent singer Shama Rahman handed the crest to the artiste.

A wonderful Jugalbandi of Sitar by Pandit Kushal Das and Kalyanjit Das enchanted a sea of people at the dead of night. They performed Raga Jogkauns. Artist Monirul Islam and Singer Aditi Mohsin handed the crest to the performers.

The penultimate performance of the night was Khayal by Pandit Kaivalyakumar. He performed Raga Gorakh Kalyan and a Thumri in Raga Khamaj. Accompanying him were Sridhar Mandre on the Tabla; Dr Sudhangshu Kulkarni on the Harmonium; Kumar Malakar and Abhijit Kundu of Bengal Parampara Sangeetalay on the Tanpura. Festival memento was handed over to him by Dr. Syed Saad Andalib, Vice Chancellor of BRAC University.

The concluding performance of the mega festival was Pandit Hariprasad Chaurasia’s mellifluous flute recital. He was accompanied by Pandit Subhankar Bannerjee on the Tabla, Pandit Bhavani Shankar on the pakhawaj, Vivek Sonar and Uka Nagai on the flute and Mushfiqur Islam on the Tanpura. He performed Raga Lalitha and folk tune and bhajan. Finance Minister Abul Maal Abdul Muhith handed the crest to the artiste.