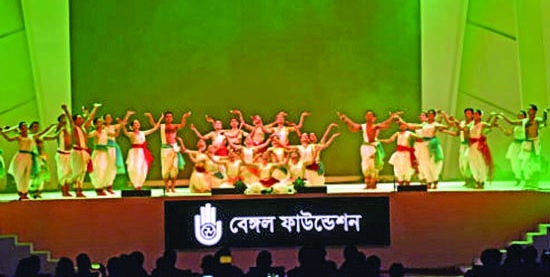 Noor remarked that it is a matter of great joy that the festival is taking place despite all the uncertainties. Abul Khair, Chairman of Bengal Foundation, appealed to all the TV channels in the country to dedicate at least one hour of their daily programming to classical music. Harsh Vardhan Shringla, Indian High Commissioner to Bangladesh, said that the festival will help strengthen the ties between Bangladesh and India. This year’s festival commenced with a dance performance by Sharmila Banerjee’s troupe, Nrityanandan, titled ‘Ravi Karojjal Nrityamalika.’

Other performances of the first night included a flute and violin duet by Pravin Godkhindion and Ratish Tagdeon respectively, Khayal by Vidushi Girija Devi, Sarod by Ustad Aashish Khan Jasrangi, Vocal Duet featuring Vidushi Ashwini Bhide Deshpande and Pandit Sanjeev Abhyankar and violin by Dr. L Subramaniam. Square Group is the title sponsor of the festival, with BRAC Bank Ltd supporting the event as the main sponsor. Maasranga TV is the broadcast partner, while ICE Business Times is the media partner. The event this year is dedicated to the memory of versatile litterateur Syed Shamsul Haque.