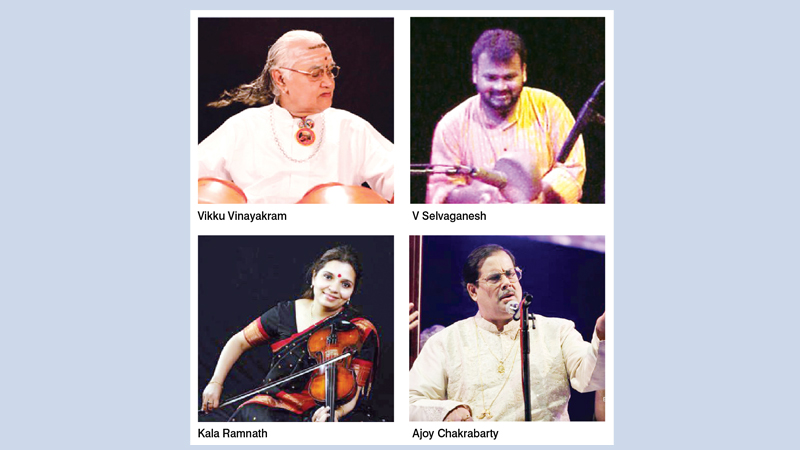 The sixth edition of ‘Bengal Classical Music Festival’ is going on in full swing at Abahani Field in Dhanmondi of the capital. Today, on the third night of the five-day mega festival, a number of fascinating performances are waiting for the music lovers like the first two days.

Vikku Vinayakram and Selvaganesh Vinayakram will come up with the performance of Ghatam & Kanjeera, while Kala Ramnath, a distinguished violinist from India, will play violin and Ajoy Chakrabarty, who is the final perform of the night, will give vocal performance.

V Selvaganesh is a renowned Indian composer and percussionist, known to play the kanjira. He is the grandson of T R Harihara Sarma and son of T H Vikku Vinayakram. Selvaganesh trained under the guidance of his uncle, T H Subashchandran, at the Sri Jaya Ganesh Tala Vadya Vidyalaya. He is a patron of classical music, as well as contemporary genres. Selvaganesh was a member of the band Masters of Percussion – with Ustad Alla Rakha, Shakti and Remember Shakti – alongside John McLaughlin and Zakir Hussain.

Thetakudi Harihara Vinayakram, popularly known as Vikku Vinayakram, is a distinguished Carnatic ghatam artist from India; one of the percussionists credited for popularising the instrument. He trained under the guidance of his father Thethakudi Harihara Sarma, a notable percussionist. Vinayakram is a recipient of the Padma Shree, Sangeet Natak Akademi Fellowship, Sangeetha Natak Academy Award, a Grammy, amongst many others, for his contributions to music. He is also the Principal of Sri Jaya Ganesh Tala Vadya Vidyalaya in Chennai, India – an academy established by his late father in 1958.

Kala Ramnath is a distinguished violinist from India, an exponent of the Mewati gharana. She began her training under the guidance of her grandfather, Vidwan A Narayan Iyer and went on to become a disciple of the legendary vocalist Pandit Jasraj. During this mentorship Ramnath revolutionised the violin technique and produced a sound so unique, evocative and akin to classical Indian vocal music that today her style is best known as the ‘Singing Violin’. Her music has also been featured in many Hollywood films, including the Oscar nominated ‘Blood Diamond’. Ramnath is a recipient of many awards, most notably the Rashtriya Kumar Gandharva Sanman, Pandit Jasraj Gaurav Puraskar, Sur Ratna and a Grammy nomination.

Ajoy Chakrabarty is a renowned vocalist from India. He began his training under the guidance of his father, Ajit Chakrabarty, who shaped his early style in North Indian vocal music. Chakrabarty later continued his training under many notable musicians such as Pandit Kanai Das Bairagi, Ustad Munawar Ali Khan (son of Ustad Bade Ghulam Ali Khan) and Guru Jnan Prakash Ghosh, to name a few. Because of his extensive training, he is not only a doyen of the Patiala-Kasur style, but can also portray the key features of other major classical gharanas. Chakrabarty’s list of awards and honours are monumental. He was awarded with the Padma Shree, the first musician to have received a Gold Medal from ITC-Sangeet Research Academy and the Kumar Gandharva Award for the ‘Best Musician of India under 45’, the Sangeet Natak Akademi Award, Banga Bibhushan, and Alva’s Virasat Award, amongst many others.