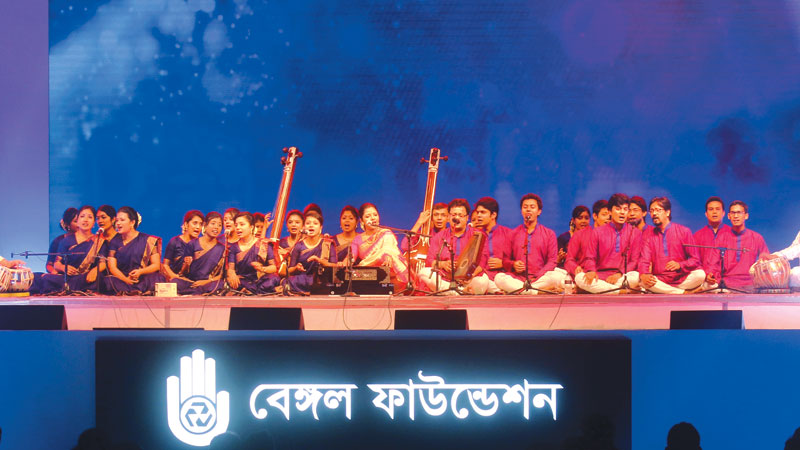 The fifth edition of the Bengal Classical Music Festival (BCMF 2016) –the world’s biggest classical music festival in terms of the number of performers on a single stage, audience capacity and duration–ends with a thrilling night, which was full of fascinating performances by the both local and Indian artistes.
This year’s festival is dedicated to ambidextrous poet-writer Syed Shamsul Haq who passed away recently. A total of 165 Bangladeshi artistes and 82 Indian artistes shared the same stage during the five-day extravaganza. Besides, 17 foreign artistes performed for the first time at the festival.
Like previous years, renowned dance artiste Munmun Ahmed and eminent classical singer Priyanka Gope, among others, were the major artistes from Bangladesh.
On the other hand, Girija Devi, an iconic Indian classical vocalist of the Seniya and Banaras Gharana, was a special attraction at the festival this year. Besides, veteran Indian sarode artiste Aashish Khan along with renowned tabla artiste from India Bickram Ghosh, noted Indian vocal artistes Ashwini Bhide and Sanjeev Abhyankar, internationally-acclaimed violinist Dr L Subramaniam from India and illustrious exponent of the Odissi tradition Madhavi Mudgal were also the headlining performers at the festival this year.
Moreover, this year’s festival included the captivating performance of internationally-acclaimed exponent of the bansuri Pandit Hariprasad Chaurasia, Pandit Shivkumar Sharma and his son Rahul Sharma, Pandit Ajoy Chakrabarty, Pandit Ulhas Kashalkar, Ustad Rashid Khan, North-Indian solo sitar and surbahar artiste Kushal Das, among others.
Begining on November 24, the festival took place every day from 7pm to 5am at the Bangladesh Army Stadium in the capital.