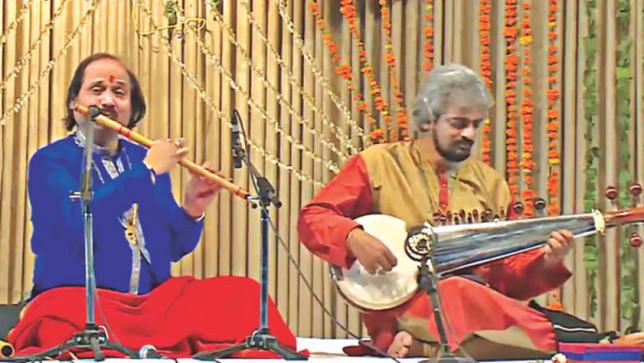 One of the greatest joys in Indian classical music is to see great artistes performing together, joining their individual musical masteries to create something even more magical. Jugalbandi is an integral part of Indian classical music, and it’s no surprise that the world’s biggest stage for it will have some riveting instances every year. The Bengal Classical Music Festival has produced many unforgettable duets of sorts – sometimes a vocal with an instrumentalist, sometimes two melodic instrumentalists, and even two percussionists.

The first of such collaborative performances at the festival is probably one of its most iconic: two legends of their arts – khayalia Vidushi Girija Devi and Kathak exponent Pt. Birju Maharaj took the stage together in 2012, performing a chaiti – “Bairan Re Koyelia Tori Boli Na Sohaye”. In the years to come, the jugalbandi performances of Pt. Ronu Majumdar (flute) and the late Dr. M Balamuralikrishna (vocals), Pt. Tejendra Narayan Majumdar (sarod) and Ganesh Rajagopalan (violin), Pt. Yogesh Samsi and Pt. Shubhankar Banerjee’s tabla duet, Pt. Ajoy Chakraborty (khyal vocals) with slide guitarist Debashish Bhattacharya and the Jasrangi vocal jugalbandi of Vidushi Ashwini Bhide-Deshpande and Sanjay Abhayankar remain some of the most memorable.