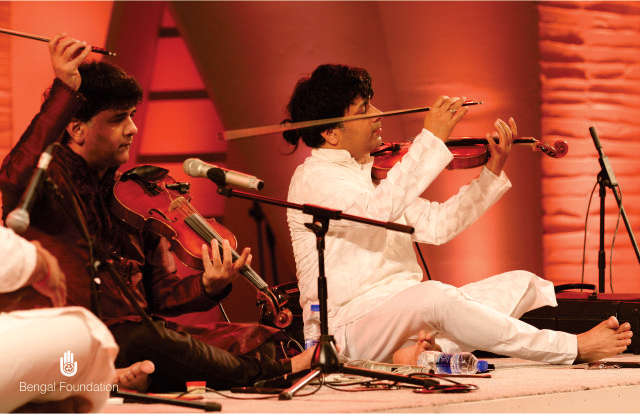 Ganesh and Kumaresh Rajagopalan are a noted Indian duo of violin players who are a part of the Carnatic music fraternity. The brothers are best known for their contributions to Shastriya Sangeetham (Classical Music) – bringing forward refreshingly original content and style for the instrument. Ganesh and Kumaresh were born in Kanpur and began their training under the guidance of their father, T S Rajagopalan. The brothers began performing on stage from a very early age.
Ganesh and Kumaresh performed extensively in India, United States, Canada, Germany, France, Belgium, Switzerland, Middle East, South East Asia, Maldives, Australia and etc. They were the youngest violinists to be recognised as A-top ranking artistes by the All India Radio and was awarded with the State Artistes of Tamil Nadu while still in their teens, the Asthana Vidwans of the Sri Matam of Kanchi Kamakoti Peetam and Sringeri Sharada Madhom, Dwaram Venkata Swami Naidu Award and titles including Kalaimamani, Sunaada Sironmani, Sangeetha Saragnya, Sarasahana Praveena amongst many others.