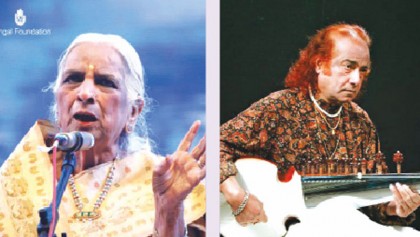 Today, on the opening day of the most-awaited ‘Bengal Classical Music Festival 2016’, two living legends, Vidushi Girija Devi—an iconic Indian classical vocalist of the Seniya and Banaras Gharana and Aashish Khan—a distinguished sarode artist from India, from the classical music world will perform at the Bangladesh Army Stadium in the capital.

Girija Devi is an iconic Indian classical vocalist of the Seniya and Banaras Gharana. She began her training under the guidance of vocalist and sarangi artist, Sarju Prasad Misra, in khayal and tappa before continuing her training under Chand Misra in a variety of disciplines. A career spanning over six decades, Devi has been a Guru at the ITC Sangeet Research Academy since its inception and is a recipient of many prestigious awards including the Padma Vibhushan in 2016, Padma Bhushan in 1989, Padma Shri in 1972, Sangeet Natak Akademi Award in 1977 and the Sangeet Natak Akademi Fellowship, amongst numerous others.
On the other hand, Aashish Khan is a distinguished sarode artist from India. He comes from a family of notable musicians in the realm of Indian classical music; he is the grandson of Ustad Allauddin Khan (was born in Shibpur, Brahmanbaria, Bangladesh), son of Ustad Ali Akbar Khan, and nephew of Annapurna Devi. Khan was initiated to North Indian classical music by his grandfather and he continued his training under the guidance of his father and aunt. Apart from a successful career in music as a performer and composer, Khan is also an adjunct professor of Indian classical music at the California Institute of the Arts, and the University of California at Santa Cruz, United States.