Girija Devi Passes Away at 88 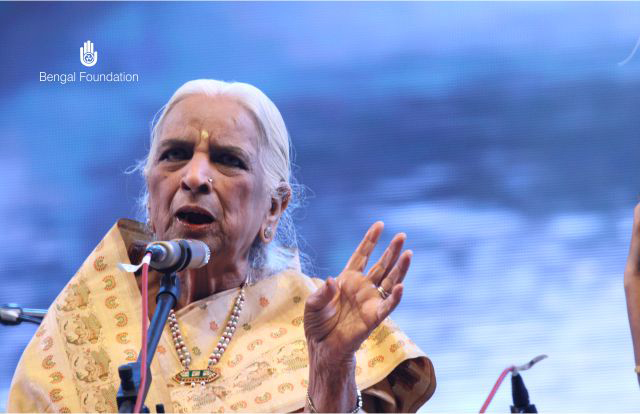 Bengal Foundation mourns the passing of the iconic classical vocalist Girija Devi. We are fortunate that Devi graced us with an unforgettable performance at the Bengal Classical Music Festival in 2012, 2013, and again in 2016. We will remember her for her immense contributions to the realm of classical music.
Girija Devi was an exponent of the Seniya and Banaras Gharana. She began her training under the guidance of vocalist and sarangi artist, Sarju Prasad Misra, in khayal and tappa before continuing her training under Chand Misra in a variety of disciplines. A career spanning over six decades, Devi has been a Guru at the ITC Sangeet Research Academy since its inception and is a recipient of many prestigious awards including the Padma Vibhushan in 2016, Padma Bhushan in 1989, Padma Shri in 1972, Sangeet Natak Akademi Award in 1977 and the Sangeet Natak Akademi Fellowship, amongst numerous others.
Devi passed away on 24 October, 2017, at the age of 88.