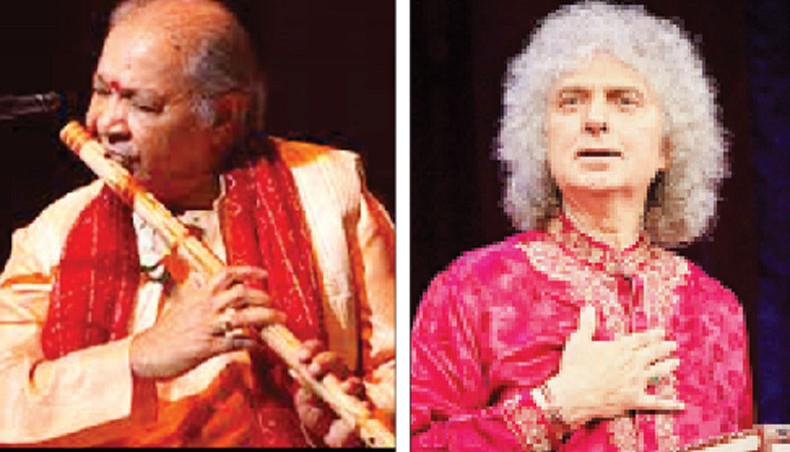 Legendary Indian flutist Pandit Hariprasad Chaurasia and santoor player Pandit Shivkumar Sharma will perform tonight at the Army Stadium in Dhaka, bringing down the curtain on the five-day Bengal Classical Music Festival 2016.
Apart from the instrumental renditions of the duo, tonight’s show will also include vocal presentation by the students of the music department of Dhaka University, sitar recital by the students of Bengal Parampara Sangeetalaya, khayal by Kumar Mardur, sitar recital by Pandit Kushal Das and khayal by Arati Ankalikar.
Hariprasad Chaurasia, who took part in all the previous editions of the festival, will be the last performer of this year’s event that began on Thursday.
Regarded as one of India’s most respected classical musicians, Pandit Hariprasad Chaurasia got numerous awards and accolades in his career, including Sangeet Natak Academy Award, Padma Vibhushan, National Eminence, the title ‘Officer in the Order of Orange-Nassau’ by the Dutch Royal family of Amsterdam, and Knight in the Order of Arts and Letters by the Ministry of Culture of France.
He received an honorary doctorate from the North Orissa University for his ‘unparalleled’ contribution to Indian classical music in 2009.
Meanwhile, Pandit Shivkumar Sharma is credited with bringing santoor from the realm of Kashmiri folk music into that of the Indian classical concert platform. His persistence, repeated experiments and reconfigurations with the instrument gave it new life and eventually paved the way for a new genre of music and tremendous success.
Considered to be a living legend and an embodiment of Indian ethos and values, Shivkumar Sharma has been the recipient of several awards, notably the Padma Shree and the Padma Vibhushan.