Kishori Amonkar Passes Away at 84 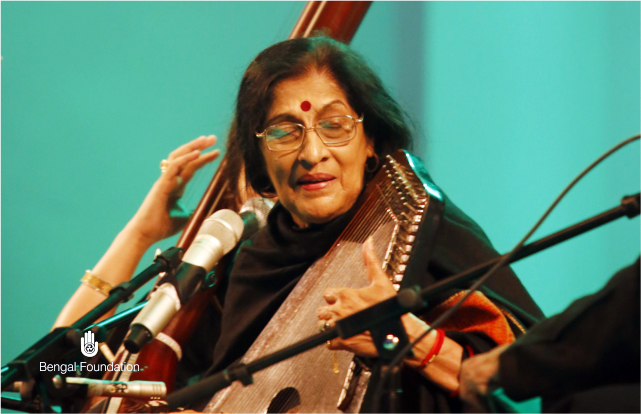 Bengal Foundation mourns the passing of the iconic classical musician Kishori Amonkar. We are fortunate that Amonkar graced us with a memorable performance at the Bengal Classical Music Festival in 2014, and we will remember her for her immense contributions to the realm of classical music.
Kishori Amonkar was an Indian vocalist, best known for her contribution and innovation in the Jaipur-Atrauli gharana of music, and her distinctive style of khayal gayiki as well as thumri and bhajan. She trained under the guidance of her mother, the illustrious Moghubai Kurdikar, and later under Anjanibai Malpekar. In recognition of her contribution to the arts, she received numerous awards, including the Padma Bhushan in 1987 and Padma Vibhushan in 2002, two of India’s most prestigious civilian honours. She became a fellow of the Sangeet Natak Akademi in 2010, a lifetime appointment held by just a few dozen individuals, and was also awarded the first Pandit Bhimsen Joshi Lifetime Achievement Award in 2013.
Amonkar, 84, passed away on, Monday, 3 April 2017.