The performances by the local artistes drew the attention of the audience on the second day of the world’s biggest classical music event titled ‘Bengal Classical Music Festival (BCMF) 2016’ at the Bangladesh Army Stadium on Friday night. Not only the thrilling Kayal performance by Bangladesh’s noted artiste Priyanka Gope, but also the brilliant performance by young students of Bengal Parampara Sangeetalay fascinated the audience as they enjoyed the performances of international standards by the local artistes during the landmark event. 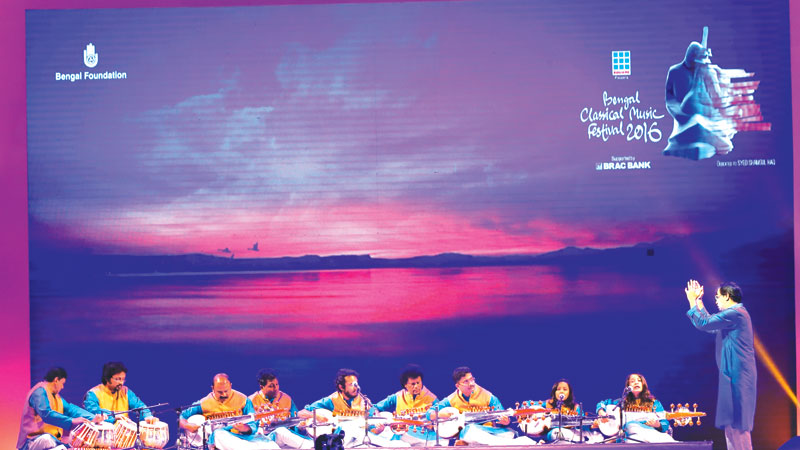 The troupe of Bengal Parampara Sangeetalay included Fahmida Naznin, Supantho Mojumdar, M J J Bhoobaun, Pancham Sanyal, Nusrat-E-Jahan Khushbo, Chinmoy Bhowmik and Prashanta Bhowmik. They performed teen taal on the tabla. Along with them, on harmonium was Milind Kulkarni. These students have been taught by Pundit Suresh Talwalkar. Barrister Moudud Ahmed handed over the crests to the performers. Pundit Suresh Talwarkar expressed his optimism about the bright future of these students.
On the other hand, with her captivating vocal performance, Bangladesh’s brilliant singer Priyanka Gope enthralled the audience and made them feel proud to witness a local singer performing at the same tempo of an international artiste. She performed Khayal in Raga Bagesree and Thumri in Raga Kaushikdhwani. Iftekhar Alam Pradhan accompanied her on table, Murad Ali Khan on sarangi and Uday malakar on harmonium.
All other segments of the night were a blending of classical dances, various instrumental and vocal music performances.
Rahul Sharma, who was one of the main attractions of the festival, enthralled the audience with his soulful santoor performance. He started with performing Alap-jor-jhala in Raga Gaoti; this followed three compositions namely Rupak Taal, Madhyalay and Drut Teen Taal. Satyajit Talwalkar accompanied him on tabla.
Besides, Khayal by Pundit Ulhas Kashalkar, who now became a regular artiste of the festival, fulfilled the expectation of the audience with his influential performance on Friday night.
Yesterday’s (third night of the festival) performances included Sarod by students of Bengal Parampara Sangeetalay; Carnatic Flute by Shashank Subramanyam; Khayal by Dr. Prabha Atre; Tabla by Pt Anindo Chatterjee; Dhrupad by Pt Uday Bhawalkar; Sitar by Pt Sanjoy Bandopadhyay and Khayal by Ust Rashid Khan.
To note, presented by Square and dedicated to ambidextrous poet-writer Syed Shamsul Haq, the festival is being taken place every day from 7pm to 5am until tomorrow.