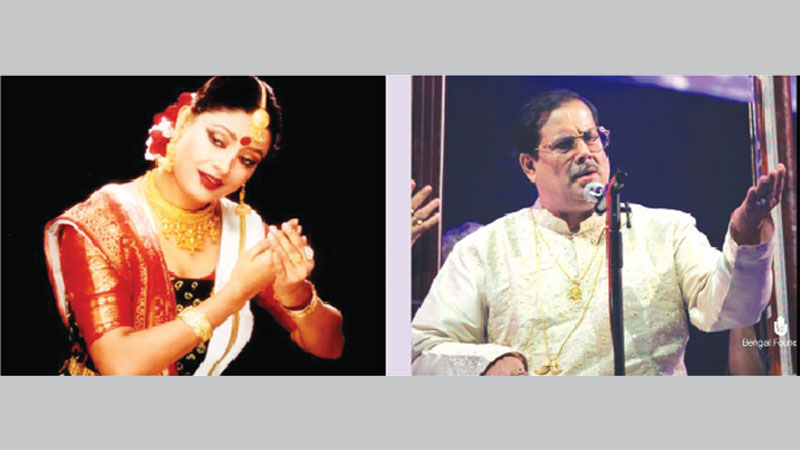 Eminent dance artiste Munmun Ahmed from Dhaka is all set to delight audience tonight with her dance performance accompanied by her troupe, while renowned vocalist Ajoy Chakrabarty from India will come on stage to perform Khayal. Munmun Ahmed is an esteemed dancer and instructor from Dhaka, Bangladesh. Skilled in the disciplines of kathak, she trained under the guidance of Azhar Khan, Syed Abul Kalam, Ram Mohan Maharaj, Raj Kumar Sharma and Pandit Birju Maharaj. Ahmed is a founding member of Nritya-Dhara, a Cultural and Training Secretary at the Bangladesh Nritya Shilpi Sangstha, and also runs her own dance academy, Rewaj Performers School. She has toured in Bangladesh and abroad, and is a recipient of several national and international awards, notably the National Competition Award by Shishu Academy (1980 and 1981), UNESCO Cultural Award (2000), N.H.K. Japan Prize (1988), and Ekota Award (2001 and 2003), amongst others.
On the other hand, Ajoy Chakrabarty began his training under the guidance of his father, Ajit Chakrabarty, who shaped his early style in North Indian vocal music. Chakrabarty later continued his training under many notable musicians such as Pandit Kanai Das Bairagi, Ustad Munawar Ali Khan (son of Ustad Bade Ghulam Ali Khan) and Guru Jnan Prakash Ghosh, to name a few. Because of his extensive training, he is not only a doyen of the Patiala-Kasur style, but can also portray the key features of other major classical gharanas. Chakrabarty has been with ITC-Sangeet Research Academy since its inception, joining in 1978 as its first scholar. He later became one of the youngest gurus of the Academy – a post he still holds today – and is also a member of its Expert Committee. Chakrabarty’s list of awards and honours is monumental. He was awarded with the Padma Shri, the first musician to have received a Gold Medal from ITC-Sangeet Research Academy and the Kumar Gandharva Award for the ‘Best Musician of India under 45’, the Sangeet Natak Akademi Award, Banga Bibhushan, and Alva’s Virasat Award, amongst many others.