Munmun and Rewaaz own the limelight

On the fourth evening of the Bengal Classical Music Festival, prominent Kathak dancer of our country Munmun Ahmed and students from her dance institution Rewaaz gave a remarkable performance. Kathak in purest and most honest form was put forth for the audience.

The troupe began with a Guru Vandana – the giving of thanks from the students to their teacher, expressing their gratitude and devotion. The piece provided a platform for the students of Rewaaz to honour Munmun Ahmed. The vandana was set to Raga Bhinna Shadaj. 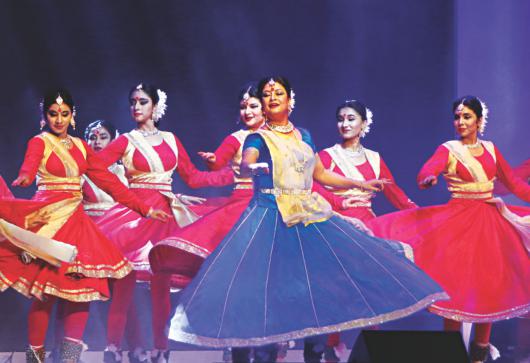 As they started off with a soft, swaying performance, Munmun Ahmed took over the stage with a vilambit teentaal solo. The solo included Thaat, Uthaan, Amad and Paran. The teentaal solo escalated to Madhya Laya, to which Munmun performed to Tehais.

After Munmun Ahmed showed the audience the essentials of Kathak, her students then performed Tejamed, Tehai and two Parans. The precise synchronisation by the youngsters was a hallmark of the performance.

Munmun Ahmed, using her wit, charm and dance – then engaged the audience with a solo including Parmelu – the bols that contain sounds from nature, two tehais that depicted a hunter whilst hunting, and game of ‘catch the ball’ with the audience, and lastly, a Paran that she helped the audience relate to the sound of a moving train.

As the troupe came back and presented two Tehais and one Tukda that involved 11 spins, Masum Hossain dazzled the audience with a quiet solo of 30 spins. Munmun Ahmed then came back in action with a Ladi, and ended in a Tehai – with her troupe.

To show the storytelling abilities of Kathak, Munmun then performed an emotive piece on a Thumri- “Mori Gagariya Kahe Ko Phodi Re Shyam” in Raga Gaud Malhar, a beautiful story of Radha and Krishna unravel before them.

Munmun and troupe returned with a Drut Paran, right after which she and her daughter Aporajita Mustafa presented a short, enticing jugalbandi. After another Drut Paran by everyone on stage, their set ended with a spectacular jugalbandi between Guru and all 20 Shishyas.