Music is a journey – L Subramaniam 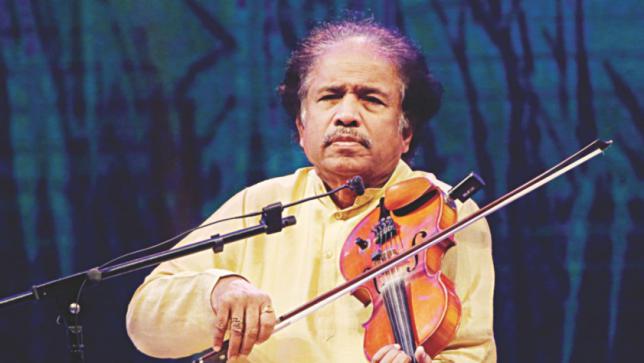 Dr. Lakshminarayana Subramaniam (born 23 July 1947) is an acclaimed Indian violinist, composer and conductor, trained in the classical Carnatic music tradition and Western classical music, and renowned for his virtuoso playing techniques and compositions in orchestral fusion. One of the biggest figures of Indian Classical violin, Subramaniam spoke to The Daily Star, about his first performance in Dhaka and more.

Zahangir Alom
How was your experience of performing here, in such an ambience and in front of our audience?

Subramaniam: The audience is fantastic, the ambience is great and to have a classical music festival of such magnitude is fabulous. It is easy to do everything else because of commercial support, if you do non-classical things. But taking a bold initiative of doing classical music is immensely appreciable; because this is our culture, this is our roots – the heritage of our classical music. This kind of initiatives gradually exposes people to branch out to different kinds of music and gives them an opportunity to listen to other forms of classical music – North Indian, South Indian and Western classical music. After getting into the realm of music, the whole state of their mind will begin to change. We will understand human beings and their nature, surfacing the idea that we are from the same roots. It is so great to see the happenings here.

Subramaniam: Of course! Abul Khair, Chairman of Bengal Foundation, has already asked me to come next year. I have definitely cleaned my schedule for next year’s festival, and would love to come again.

Subramaniam: If you look at the history of Indian Music, it all started from Vedas. After twelfth century, during the Mughal era, it slowly developed and instruments were modified. It took lots of influences, beautiful influences. Now we are two systems – North Indian and South Indian Classical Music, but the roots are the same. Basically, the ornamentation, approach and compositional structures are different. We have Kritis, a very structured composition one has to follow and you are free to produce lots of polyrhythm. Some of the musicians of the South in the 18th centuries made 72 parent scales, and simultaneously they developed 22 shruti, microtones, rhythmic cycles, 108-tala cycle, 175-tala cycle … all these rhythmic cycle they developed and put these into the book form. So what happened…lots of composers started writing compositions on the parent scale.

What can we do to help our audience understand and appreciate Carnatic music, as they are more used to Hindustani Music?

Subramaniam: If one starts slowly listening to the music of South with an open mind, they will start getting into it. Music is music ultimately. You need patience to appreciate it. Artistic creation or expression of melodic emotion depends on the artistes. They bring life to each note. Somebody gets fascinated by the technique, someone gets captivated by the complicated raga and rhythmic cycle, while somebody delves into music having spiritual connotations. If you have an open mind, you will appreciate all the layers of music.

Music has the mesmerising power to reach the ultimate and to delve into the spiritual state of mind. Music is a journey. You don’t know when and how you will direct your voyage.