The Bengal Classical Music Festival 2017 premiered with amazing orchestra performance
The 6th Edition of Bengal Classical Music Festival, organised by the Bengal foundation, commenced for 2017 to go on for five nights. The festival began at 7pm onwards on December 26 at the Abahoni Grounds in Dhanmondi.
This year’s festival was initiated with a soothing performance of Raga Abhogi, by Dr. L. Subramaniam on the violin, with the sophisticated support of Sriram Murthy on mridangam, Pandit Tanmoy Bose on the tabla and Sathya Sai Ghantasala on the morsing. This was elevated in a fury of notes by the Astana Symphony Philharmonic Orchestra, conducted by Berik Batyrkhan, as they performed a symphony by Tless Kazhgaliyev. They also performed parts of P Tchaikovsky’s Swan Lake.
Dr. L Subramaniam returned to stage to perform his composed Shanti Priya. As he led with his violin, he was supported by Dhulipala on the mridangam, Bose on tabla, Ghantasala on the Kanjira, while Berik Batyrkhan conducted the Astana Symphony Philharmonic Orchestra.
After the performance, Asaduzzaman Noor, MP, Honourable Minister for Cultural Affairs and Hasanuzzaman Inu, MP, Honourable Minister for Information handed over crests to the artistes.
The festival was officially inaugurated by Honourable Finance Minister of the Government of Bangladesh, Abul Maal Abdul Muhith, as the Chief Guest of the event at 10 pm. Other special guests were Honourable Minister of Cultural Affairs, Asaduzzaman Noor, MP; H.E. Harsh Vardhan Shringla, High Commission of India; Salman Rahman, President of Abahoni grounds; Tapan Chowdhury, Managing Director of Square Pharmaceuticals Ltd, and CEO and Managing Director of BRAC Bank Ltd, Selim R. F. Hussain.
After the inauguration, the audience hold one minute silence to commemorate late Annisul Huq, Vidushi Girija Devi and Kishori Amonkar.
In his inauguration speech, the Finance Minister felicitated everyone including the organizers for this event. He expressed his gratefulness to be able to attend all the classical music festivals including this one. He said, for the first time in this festival an attempt has been made to represent both western and eastern classical music. Mentioning about the prior complicacies that arose with venue allocation, he said that it seemed imperative to him that there should a particular venue allocated for organizing this kind of popular public event. He hoped that next year a homegrown orchestra would perform as the curtain raiser in the next year’s event.
Special guest Asaduzzaman Noor, MP paid his homage to Father of the Nation Sheikh Mujibur Rahman, Founder of Abahoni Club Sheikh Kamal and other martyrs of the Liberation War. He said, “Music purifies our soul, invokes secular thoughts and open mildness among us and above all, teaches us how to love our country and the countrymen.” He hoped that this festival would encourage us to continue fighting against the communal forces.
H.E. Harsh Vardhan Shringla delivered his complete speech in Bengali. He said, “Bengal Classical Music Festival will inspire the people of Bangladesh who are secular minded and own multitude of cultural practices.”
Anjan Chowdhury, Managing Director of Square Group wished phenomenal success of this event.
Salman Rahman also felicitated the organizers of the event in his speech.
Selim R F Hussain expressed his pride to be a part of the biggest classical music festival of the world.
Bengal Foundation Chairman Abul Khair expressed his gratitude to all the patrons, sponsors for their endearing support. He rendered his special thanks to Honorable Prime Minister Sheikh Hasina, Honorable Finance Minister Abul Mal Abdul Muhith, MP and Honorable Minister for Cultural Affairs Asaduzzaman Noor, MP. He said, “The benefits of having a cultural revolution inside the country is that it will make people more humane. However, until we can patronize to create artistes like Rashid Khan, Dr. L. Subramaniam, we won’t be able to achieve our goal.” In his conclusion, he expressed his hope to dedicate the future events to Abul Mal Abdul Muhith, Sir Fazle Hasan Abed and Dr. Sanjida Khatun.
Rajrupa Chowdhury graced the stage with her sarod for the next performance. She played Raga Anil Madhyam. Pt. Avijit Bannerjee accompanied her during the performance with Tabla. AKM Mozammel Hoque, Honorable Minister for Liberation War Affairs handed over the crest to the artistes.
Vidushi Padma Talwalkar was the next performer of the night. Ankita Deole provided vocal support during her performance, while Sanjay Adhikary was on Tabla and Rupashree Bhattacharya was on harmonium. She performed Raga Kedar.
The audience can enjoy quality food and beverages at the venue. A pictorial exhibition, featuring the lives of legendary music exponent of Bangladesh, is set up at the venue; another exhibition featuring works of Bengal Institute of Architecture, Landscape & Settlement is also there. Bengal Digital, Bengal Express, Bengal Parampara Snageetalay, Aranya, Bengal Visual Arts Program, Bengal Boi, BRAC Bank and Square Group have their distinctive stalls at the venue. Journalists should be pleased to find a Wi-Fi zone dedicated to them.
Square Group is presenting the Bengal Classical Music Festival as the title sponsor. BRAC Bank is supporting the event. Channel i is the broadcast partner, while ICE Business Times is the media partner. Pan Pacific Sonargaon is the hospitality partner of the event, and Square Hospital is the medical partner. Blues Communications is handling the event management part. The festival is being presented in association with Bengal Digital, Bengal Parampara Sangeetalay. Perfect Harmony of Singapore is the strategic partner.
For the last five years, the Bengal Classical Music Festival has been the largest classical music event in the subcontinent showcasing performances from over two hundred classically trained singers and dancers. With the goal to popularise and perpetuate the practice of classical music, this festival will go on till December 30th. The event this year is dedicated to eminent educationist, researcher and cultural exponent Professor Emeritus Dr. Anisuzzaman. 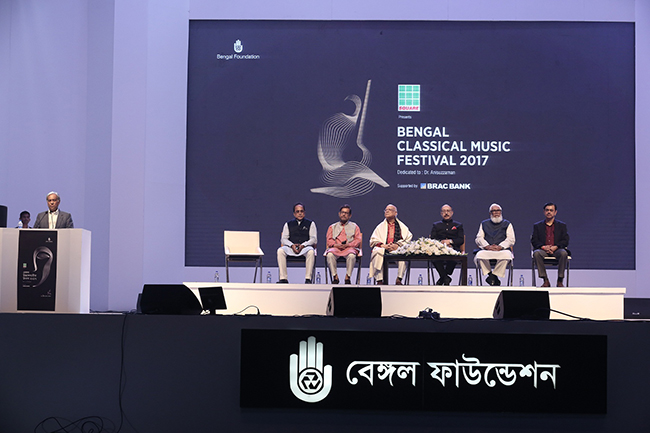 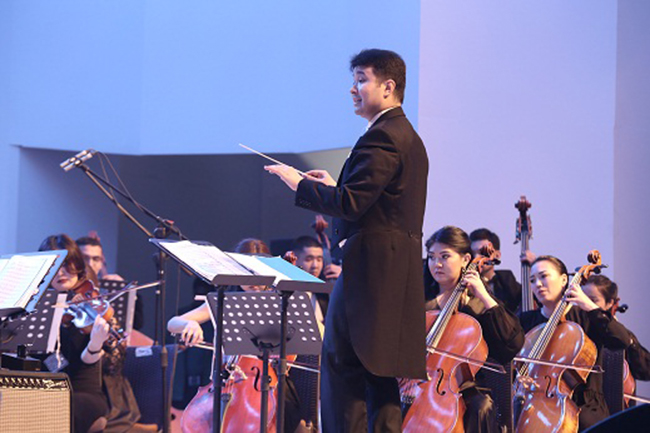 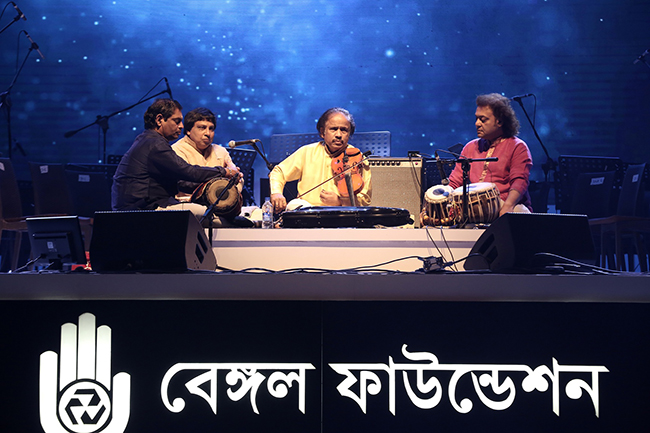 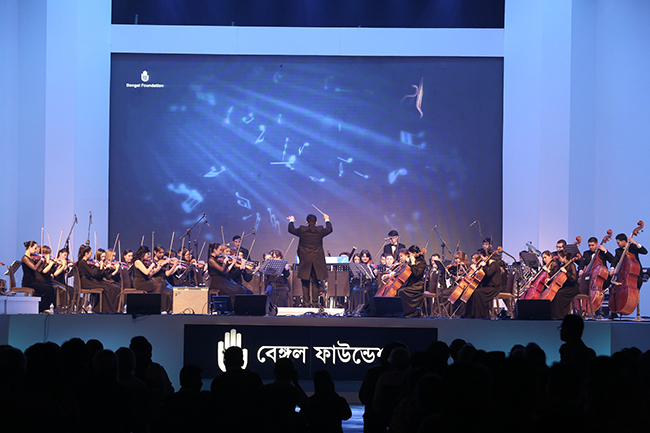