The public registration for the Bengal Classical Music Festival 2016 opened yesterday, on the official festival website and via SMS. The upcoming fifth edition of Bengal Foundation’s mega event, which is deemed the world’s biggest festival of classical music, will be held at the Army Stadium from November 24-28 and like previous years will feature some of the biggest names in Indian Classical Music.

On with the e-ticket sent upon registration, the full festival schedule was also released. The festival will open with a group dance presentation led by Sharmila Banerjee. The following performances are: duet by Pravin Godhkindi (Flute) and Ratish Tagde (Violin); Khayal vocals by Vidushi Girija Devi; Sarod by Ustad Aashish Khan; Jasrangi duet (vocal) by Vidushi Ashwini Bhide Deshpande and Pandit Sanjeev Abhyankar. The first day will close with violin by Dr. L Subramaniam. 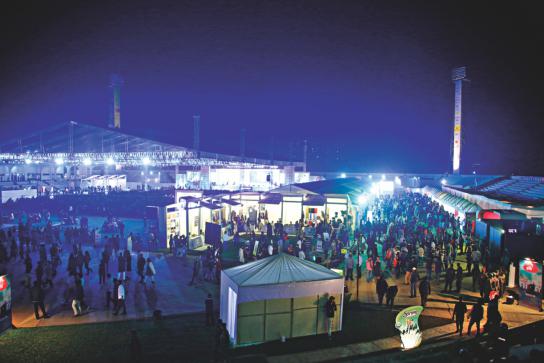 The festival has grown in stature and popularity over the years.

The second day’s performances are: Odissi dance by Vidushi Madhavi Mudgal and troupe; a group Tabla recitation by students of Bengal Parampara Sangeetalay; Khayal vocals by Priyanka Gope; Santoor by Rahul Sharma; Vocal presentation by Mohammed Shoeb and others; Sitar by Purbayan Chatterjee; Khayal by Pt Ulhas Kashalkar and a duet by Pandit Ronu Majumdar and U Rajesh.

The programme will begin at 7pm everyday and continue till dawn. The festival schedule may change without prior notice, according to the e-ticket. A detailed terms and conditions for attendees are also included in the pass.

Registration can be done for free from www.bengalclassicalmusicfest.com, or by sending a text message typing BENGAL to 6969. Off-site registration will also be held at outlets of Bengal Foundation.